Swara Bhasker On Twitter Trend #ArrestSwaraBhaskar: And That My Friends Is Why Most Celebrities in India Only Raise Their Voices For Elephants! 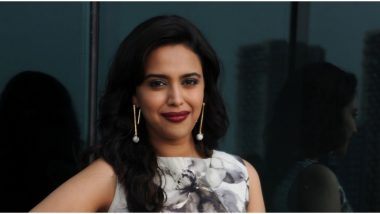 Bollywood actress Swara Bhasker is trending on Twitter again! Her old video from during the CAA and NRC protests is going viral on the internet. This is after she extended her strong support to Safoora Zargar, whose bail plea was rejected for the third time. Swara has now reacted to the whole #ArrestSwaraBhaskar trend that has caught up pace on the social media. Just Like Sonu Sood, Swara Bhasker Is Also Helping to Send Migrant Labourers Home (Read Tweets).

The Veere Di Wedding actress shared the screengrab of the trend and wrote, "And that my friends.. is why most celebrities in India only raise their voices for elephants! #safoorazargar #ArrestSwaraBhaskar #bizarrebuttrue." In the tweet, she also pointed out about the celebs' opinions on the pregnant elephant that recently died in Kerala. See the tweet below.

And that my friends.. is why most celebrities in India only raise their voices for elephants! 🙏🏽🙏🏽🙏🏽 #safoorazargar #ArrestSwaraBhaskar #bizarrebuttrue pic.twitter.com/Nn3k3x8Nlv

Here's the video that is going viral:

Give me one reason why Swara Bhaskar shouldn't be arrested

Safoora Zargar, the research scholar from Jamia Millia Islamia, who is 21 weeks pregnant, was denied bail for the third time. The 27-year-old is currently in Tihar Jail. She was arrested under FIR 59 which is the anti-terror law. Twitter has been divided on her arrest for a while now and Swara is in the support of release of Safoora from the jail. She also condemned the court's decision of denying the bail.

(The above story first appeared on LatestLY on Jun 06, 2020 07:22 PM IST. For more news and updates on politics, world, sports, entertainment and lifestyle, log on to our website latestly.com).