Former beauty queen and Bollywood actress Urvashi Rautela says that the film industry is kind of unpredictable, and everyone has to go through ups and downs. At a time, when there is a heated debate about nepotism and camps in Bollywood, has her projects ever been affected because she is an outsider? 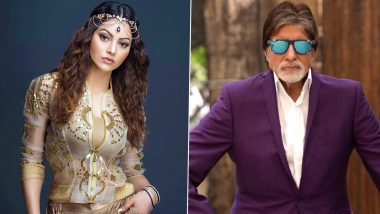 Urvashi, who made her Bollywood debut in the 2013 Sunny Deol-starrer "Singh Saab The Great", says there have been times when she was cast for a good role but could not take up the project. "There have been times when I was offered a very beautiful film, which was a kind of sequel of a superhit and it was with Mr Amitabh Bachchan, and I couldn't be part of it. I was offered that film but I couldn't be part of it. Urvashi Rautela Is Open to Experimenting Different Roles Onscreen

Without revealing any detail about the film, she added: "So, yeah that is something I have regret in my life of not being able to work with Mr Amitabh Bachchan sir." She still blames herself. "I would say it was just a silly mistake and I'm blaming myself for that," she said.

(The above story first appeared on LatestLY on Jun 19, 2020 01:15 PM IST. For more news and updates on politics, world, sports, entertainment and lifestyle, log on to our website latestly.com).