Varun Dhawan is gaining a reputation as a slapstick action star more than a dependable actor. And we know he can act well - October, Badlapur are fine examples. But, sometimes he features in scenes so ridiculous that makes you wonder if he even reads the scripts he is shooting for. 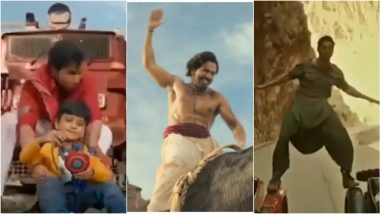 Varun Dhawan is gaining a reputation as a slapstick action star more than a dependable actor. And we know he can act well - October, Badlapur are fine examples. But, sometimes he features in scenes so ridiculous that makes you wonder if he even reads the scripts he is shooting for. In Badrinath Ki Dulhania, his character gets molested by a bunch of gay men and it plays out like a comical scene. Right now, the actor is being ridiculed on social media for a scene in his latest film, Coolie No 1. Coolie No 1: Varun Dhawan Saving a Kid From a Fake Train in This WTF Scene Leaves Fans in Splits; Reminds Us of Kalank’s Bull-Fight Scene (Watch Video).

Not that the film is being loved by anyone, but the scene, in particular, has become the butt of jokes. This made us look back at Varunardo's filmography a little closer to realise that this is not the first time the actor has featured in a ridiculous, over-the-top action sequence that defied the laws of science. There's more where that comes from. Have a look. Coolie No 1 Twitter Review: Varun Dhawan, Sara Ali Khan’s Chemistry Fails to Impress Netizens, Gets Trolled Massively With Hilarious Memes.

Train Scene in Coolie No 1

Varun plays a coolie in the film, who spots a deaf kid on the railway track, playing with a toy. A train is approaching. Varun jumps off the bride, lands on the very train and starts running atop of it, barely missing the extension lines. He reaches the front of the engine, jumps off of it, lands on the railway track and slides away with the kid to safety, while the train continues its course.

Just in Case The Clip Is Taken Down, Here Is Another Link

In Main Tera Hero, Varun's character is celebrating a victory with his girlfriend, played by Ileana D'Cruz, with a bike ride on an aeroplane runway. A man lands with a chopper, shoots the bike tyre, sending the girl off of it, and Varun skids. And the bike begins to slide against the road. And it keeps sliding. And sliding. And sliding. When it finally stops, Varun's leg is somehow stuck under the bike disabling from saving his girlfriend from getting kidnapped. No he is not injured because he runs at a ridiculous speed later trying to chase a chopper.

After fight sequence on an open bus, which somehow is not very bad, Varun Dhawan's character has the worst meet up possible with his identical twin brother. Varun jumps off the moving bus, lands on the bonnet of a car, which is being driven by his twin. There is not an iota of disbalance, or any respect for physics here.

Ajay Devgn entered our lives back in the '90s by riding two bikes at the same time (each of his legs on either bike). The scene looked cool in the '90s. But in 2016, it just looks ridiculous. Especially, when the villain is driving one of the bikes and can easily change his direction? And the road suddenly ends to enter an open field for some reason.

The most obvious criticism to this post will be that when Hollywood does it we all lap it up. Well, the difference is in execution. But their budget is so high. Well, there some marvellous low budget action movies in India and Hollywood as well. Nothing beats Taapsee Pannu's fight in the hotel room in Baby. Enter The Dargon, one of the greatest films ever made, was made on a considerably low budget. Well, let us hope that one day Bollywood begins investing more in writing a good action scene as much as it does in scouting locations for it.

(The above story first appeared on LatestLY on Dec 26, 2020 06:04 PM IST. For more news and updates on politics, world, sports, entertainment and lifestyle, log on to our website latestly.com).