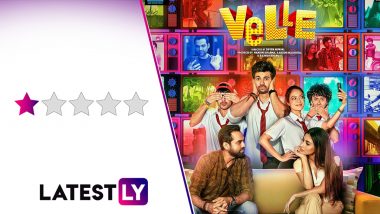 Velle Movie Review: Deven Munjal's Velle is an official remake of the 2019 Telugu film Brochevarevarura. Now I have not seen the original, but I assume it to be a smart black comedy, considering it impressed Bollywood enough to get it remade. There is some glimpses of that smartness in this remake, which I did catch, but that felt more like the mirage of an oasis in what is the industry's another dry attempt to establish Sunny Deol's son, Karan Deol as an actor. Velle, quite like its name, is useless in doing that. Velle Song Uddne Do: Watch Abhay Deol As An Aspiring Storyteller And His Beautiful Heroine Mouni Roy In This Soothing Melody.

Velle has two tracks going side by side with each other. One is of a trio of  troublemaker 12th standard students - Rahul (Karan Deol), Rambo (Savant Singh Premi) and Raju (Vishesh Tiwari) - who befriend the equally mischievous Riya (Anya Singh), the daughter of their strict principal Radheshyam (Zakir Hussain). The boys help Riya in running away from her home to follow her dancing aspirations, by first fake-kidnapping her to get money from her father. The friends land in actual trouble when Riya gets kidnapped for real.

The other track is that of an aspiring director Rishi (Abhay Deol) narrating his screenplay to a popular actress Rohini (Mouni Roy), which leads us to presume that he is telling the story of the four friends, and that he could be a grown-up Rahul.

Velle's most interesting point comes when these two tracks intersect for the first time. Did I say 'most'? Sorry, I meant 'only'. For Velle is a terribly directed film that loses your interest in the very first scene itself. It is the kind of a movie, where you cannot pick up one single department as a highlight. The editing is wobbly, the BG score loud and irritating (at times even drowning the score), dialogues terribly bad, songs bland enough, the humour atrocious and the performances not at all impressive. Scenes feel skittled together with no proper transition to another. Velle Song Raja Boy: Karan Deol and Gang Will Make You Super Nostalgic About Your Good Old School Days.

I am not sure how the original movie addressed certain plotpoints, but Velle leaves you asking quite a few questions whose answers could have got lost somewhere in the translation. Like, why did the second set of kidnappers abduct Riya and not bother to find her father's number to ask for ransom? Or where did the love blossom between Rohini and Rishi in only a matter of a couple of sittings? Or when Rishi's father is hospitalised, why does Rohini need to withdraw Rs 10 lakhs as cash from the bank to pay the hospital bills in this digital age? How did Riya's father come to the conclusion that it is Rahul and co involved in an unrelated attack in a city (though he is right in thinking so? Why is this movie titled Velle and not Ittefaqein, considering the plethora of convenient coincidences in this movie? Why am I putting so much thoughts in these questions, when fraction of that might not have been utilised in writing the movie?

I feel bad for Anya Singh. She is a good actress who was impressive in her Bollywood debut Qaidi Band, but the two Hindi movies I saw her in pitted her against bad male co-stars. Compared to his debut - the forgettable Pal Pal Dil Ke Paas, directed by his Papaji - Karan is more confident in his body language here, but shows no improvement in allowing his emotions reach his eyes. Among the friends, only Savant Singh Premi leaves somewhat of a mark. Abhay Deol comes in with his perfunctory set of expressions, while Mouni Roy looks lost here. Wonderful actors like Mahesh Thakur, Rajesh Kumar and Zakir Hussain are cast in poorly written roles.

Velle can't draw in laughs nor eke out the thrills out of its premise or from its bland set of actors. In nearly every department, the movie ironically lives up to its name. Watch at your own risk!

(The above story first appeared on LatestLY on Dec 10, 2021 10:13 AM IST. For more news and updates on politics, world, sports, entertainment and lifestyle, log on to our website latestly.com).