Vicky Kaushal Birthday Special: 5 Interesting Facts About the Uri Actor That You Did Not Know

Kaushal has come a long way, and he definitely all the credit for his hard work that he has put in to come this far. The actor has improved his silver screen nuances as an outstanding actor with consistent back-to-back versatile roles. 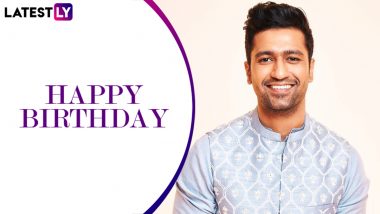 Vicky Kaushal is a charmer, who has managed to steal everyone's heart with his work. Be it his innocent role in Raazi or his strong, powerful role in Uri, the actor has managed to essay each character quite flawlessly. Not just his film, the actor has a very active social media account, and he often treats his fans with drool-worthy pictures as well. It will be safe to say that his fans would forever be in debt to Bollywood, for gifting them the star of our dreams. Sam Bahadur: Vicky Kaushal Starrer Biopic on Sam Manekshaw Gets Its Title on Field Marshal's Birth Anniversary.

Kaushal has come a long way, and he definitely all the credit for his hard work that he has put in to come this far. The actor not only improved his silver screen nuances as an outstanding actor with consistent back-to-back versatile roles, but has also exhibited a profound understanding of the subtleties that click with the audiences. His films like Masaan, Love Per Square Foot, Manmarziyaan, Lust Stories, Bhoot were well received by the fans, and now they cannot wait to see the star in his upcoming films.

But while the actor likes to stay connected to his fans, there are many things they do not know about the star. Today, as the actor is celebrating his 33rd birthday, we decided to list down 5 interesting facts about the star.

While Vicky has been a part of many films before Uri, he played his first leading role in Uri: The Surgical Strike which released in 2019. He also trained with army personnel for months. He used to train in the gym and at the naval base in Cuffe Parade, Mumbai.

Vicky has an engineering degree in Electronics and Telecommunication. He completed his graduation from Rajiv Gandhi Institute of Technology, Mumbai. During the second year of college, the actor realised that he did not want to work at a 9-5 job, and shifted his focus on acting and theatre.

Before marking his debut in acting, Vicky worked with Anurag Kashyap as an assistant director. He worked under Kashayp for Gangs of Wasseypur, during which he was advised to attend acting workshops. This ultimately helped his acting career.

To get into the skin of his role of Kamli in Sanju, he went to Surat and learned the mannerisms and body language of traditional Gujarati aged men. He wanted to nail the accent and the look and we all can agree that he did a great job.

Vicky has a habit of reading scripts at night, and when he read the script of Bhoot Part One: The Haunted Ship, he got really scared. he had no idea that it was a horror film of such kind, and decided to immediately go to sleep after reading the script. Bhoot Part One the Haunted Ship: 11 WTF Moments in Vicky Kaushal’s Horror Film.

Vicky has many upcoming projects that look promising. He has The Immortal Ashwatthama, Mr Lele, Udham Singh, Sam Bahadur in his kitty. While we wait for these films to release, join us in wishing the actor a very happy birthday.

(The above story first appeared on LatestLY on May 16, 2021 08:40 AM IST. For more news and updates on politics, world, sports, entertainment and lifestyle, log on to our website latestly.com).