Vikas Dubey Encounter: Taapsee Pannu Says 'We Did Not Expect This At All' And Vishal Dadlani Feels 'We Are Living In A B-Grade Film'

Vikas Dubey's encounter has set social media ablaze with a flurry of reactions. Two of them are of Vishal Dadlani and Taapsee Pannu. 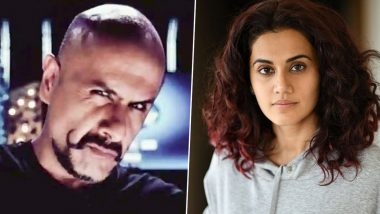 Today, we woke up to the news of Vikas Dubey being shot dead in a Police encounter. SP of Kanpur West told ANI, "Gangster #VikasDubey attempted to flee after the car overturned. Police tried to make him surrender, during which he fired at the policemen. He was injured in retaliatory firing by police. He was later rushed to the hospital." There has been a lot of chatter about it on social media and many believe it could be a fake one. Vishal Dadlani and Taapsee Pannu have now reacted to the same. Vishal Dadlani Responds to Internet Calling Him Hypocrite: ‘I’ve Also Done 5 Remakes, Not Made a Career out of Putting My Name on Other People’s Work’

Taapsee Pannu uses sarcasm to put her point across. She even manages to liken it with the comments many Bollywood films receive of being far removed from reality. As for Vishal, he found it to be a B-grade film setting that we are living in.

I hope India realises that certain politicans have used certain cops to murder a goon who was their pet until he became unviable for their purposes.

We're living in a B-grade film, & the public, media, everyone is totally fine with it.

I even see people praising it. Wow.

And then they say our bollywood stories are far from reality 😏 https://t.co/h9lsNwA7Ao

Vikas Dubey surrendered a few days back. He was a wanted criminal for killing many cops.

(The above story first appeared on LatestLY on Jul 10, 2020 01:06 PM IST. For more news and updates on politics, world, sports, entertainment and lifestyle, log on to our website latestly.com).