In addition, Kuhad also announced 'The Way That Lovers Do' tour, a North American headline run which will kick off on June 2 in Dallas. The month-long tour will include a performance at Lodge Room in Los Angeles on June 7 before wrapping up at New York City's Irving Plaza on June 28. 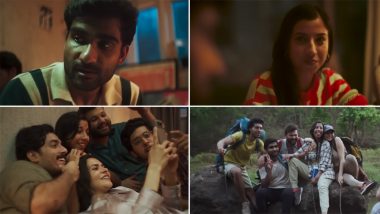 Singer-songwriter Prateek Kuhad recently released his new single titled 'Favorite Peeps', which is his second offering from his upcoming album 'The Way That Lovers Do'. The track describes a low point in the singer's life as it subtly sheds light on his tryst with depression and the value of friends and family. The music video for the song has been directed by Pranav Bhasin, scripted by Dar Gai and produced by Jugaad Motion Pictures. In addition, 'The Way That Lovers Do' album is set to hit the airwaves on May 20. Kasoor Song From Dhamaka: Prateek Kuhad’s Song Gets a Romantic Twist With Kartik Aaryan and Mrunal Thakur’s Cute Chemistry (Watch Video).

Talking about how the track came into being, Prateek shared, "I was going through a rather difficult time, and it took me some time to pull myself together and appreciate the brighter side of things. At that point I realised how your friends and your family and people who love you - they can really help you navigate through the negativity and translate the bad thoughts in your head into good ones. And being there for them feels like a responsibility that almost makes you stronger and helps you get you back on track."

The music video presents a stark contrast to the intense music. Sharing the idea behind the music video and the visuals, director Pranav Bhasin said, "Despite the dark undertones of the track, the music video primarily focuses on the idea that 'in the right company, sadness looks colourful.' Depression isn't always blue. That was central to my treatment. The film depicts a slow ripening and maturity of our internal struggle. One that all of us go through."

He further mentioned, "One that grows over weeks, is difficult to share, to shake off or escape. A friend being there for you, in silence, makes a difference. Prateek infact turned out to be a brilliant actor to direct. He revisited memories that would authentically move him, just as he would have whilst building his song. Beyond anything else, this is another of Dar Gai's brilliant tales, and it's insanely impressive to witness her move the world with her scripts. It was a joy and a privilege to have worked on this with her. This film and song are special." Prateek Kuhad Releases Music Video of His Song 'Shehron Ke Raaz'.

The album 'The Way That Lovers Do' will be released on YouTube under the label of Elektra Records. In addition, Kuhad also announced 'The Way That Lovers Do' tour, a North American headline run which will kick off on June 2 in Dallas. The month-long tour will include a performance at Lodge Room in Los Angeles on June 7 before wrapping up at New York City's Irving Plaza on June 28.

(The above story first appeared on LatestLY on May 10, 2022 03:52 PM IST. For more news and updates on politics, world, sports, entertainment and lifestyle, log on to our website latestly.com).