Hansika Motwani Birthday! From Koi... Mil Gaya to Desamuduru – Here Are the 6 Must Watch Movies of This Gorgeous Actress!

Hansika Motwani started her career as a child artiste in TV shows, and today she is one of the most successful actresses. Born to Pradeep Motwani and Mona Motwani, Hansika today celebrates her 28th birthday. 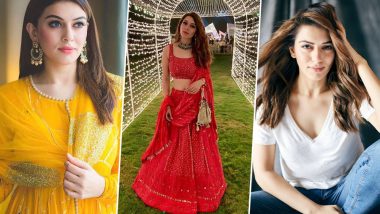 Hansika Motwani started her career as a child artiste in TV shows, and today she is one of the most successful actresses. Born to Pradeep Motwani and Mona Motwani, Hansika has been popular in the showbiz industry right from the time she started her acting career. Hansika has turned a year older today! On her 28th birthday, fans are sharing some lovely pictures of the actress from her photoshoot or previous films and wishing her on social media. In such a short span of time, Hansika has worked with some of the leading superstars of film industry. Some of her films must have been a super-hit, whilst many even tanked at the box office. From Koi... Mil Gaya to Desamuduru, let’s take a look at some of the best films of Hansika! Hansika Motwani to Share Screen Space With Rangasthalam Actor Aadhi Pinisetty in Manoj Damodharan’s Next.

It is the first installment in the Krrish franchise and Hansika Motwani was seen as a child artist in this Rakesh Roshan directorial. Her bubbly character, Priya received oodles of praises from the audience.

At the age of 16, Hansika Motwani made her debut in the Telugu film Desamuduru. Hansika who plays the role of a sannyasin named Vaishali, shared screen space with Allu Arjun. Desamuduru was highest-grossing film of 2007.

In 2011, Hansika Motwani made her entry in Kollywood with Dhanush starrer Mappillai. Though the film received mixed reviews, the lead pair’s chemistry shined through. This rom-com was declared as a hit at the box office.

Velayudham also released in 2011, starring an ensemble cast. It featured Vijay, Genelia Deshmukh and Hansika Motwani in the lead. This film wasn’t just a huge hit but it brought Hansika in limelight amongst the Tamil filmmakers.

Singam II not just performed well in terms of box office collection, but fans were impressed with the plot and performances of Suriya and lead actresses, Anushka Shetty and Hansika Motwani. Hansika plays the role of Sathya, a student who falls in love with Singam.

Hansika Motwani started her career with the TV show a serial called Shaka Laka Boom Boom. Since then she has been audiences favourite. She has experimented with various kinds of roles and has also been successful. We wish Haniska a very happy birthday and a great year ahead!

(The above story first appeared on LatestLY on Aug 09, 2019 12:01 AM IST. For more news and updates on politics, world, sports, entertainment and lifestyle, log on to our website latestly.com).