The story is set in the geriatric ward of a Yorkshire hospital, the Bethlehem, which is threatened with closure, with the Skyfall actress portraying a former librarian. 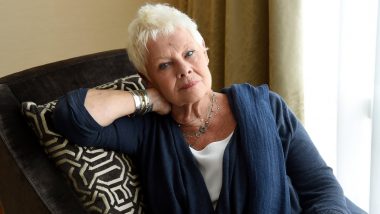 The story is set in the geriatric ward of a Yorkshire hospital, the Bethlehem, which is threatened with closure, with the Skyfall actress portraying a former librarian, who is now a patient on the facility's Dusty Springfield ward while Derek will play a former headmaster who has also been admitted to that area of the medical facility. No Time To Die: Daniel Craig’s Farewell Speech After Wrapping Up the Film Is All Things Emotional.

"Absolutely Fabulous" star Jennifer Saunders is said to be in negotiations to play a ward sister obsessed with the patients' bladder control while Julia McKenzie will also be part of the cast as a former child soprano who was known as "the Pudsey Nightingale." According to the Daily Mail newspaper's Baz Bamigboye, Heidi has added a coda in her screenplay which acknowledges the Covid-19 pandemic.

The movie is currently in pre-production and casting is still taking place for other key roles. "Allelujah!" was first staged at London's Bridge Theatre three years ago, with Nicholas Hytner serving as director. The cast includes Nicola Hughes, Simon Williams, Julia Foster, and Deborah Findlay.

(The above story first appeared on LatestLY on Sep 19, 2021 11:31 PM IST. For more news and updates on politics, world, sports, entertainment and lifestyle, log on to our website latestly.com).