Angelina Jolie Birthday: 5 Best Movies From Her Impressive Filmography To Watch On This Special Day

Right from Girl, Interrupted to Mr & Mrs Smith and Maleficent, Jolie has always been discussed and talked about for her movies. While she has tons of releases under her belt, it's time we name a few of our favourites. 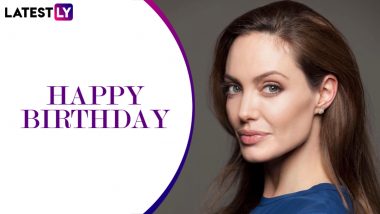 Angelina Jolie celebrates her birthday on June 4. And while we often discuss what a diva she is and how her red carpet offerings leave us stunned, today let's start rooting for her as an actress. Jolie is a star kid and acting runs in her genes. She has had some impeccable performances registered under her name in all these years and she's truly an admirable star today. An Academy Award winner, Jolie has certainly come a long way in Hollywood. She has been the highest-paid actress in the industry multiple times and is also a humanitarian who's actively involved and associated with different causes. Angelina Jolie Birthday Special: A Fashion Czarina Whose Humble Wardrobe is Every Girl's Fantasy (View Pics).

Right from Girl, Interrupted to Mr & Mrs Smith and Maleficent, Jolie has always been discussed and talked about for her movies. While she has tons of releases under her belt, it's time we name a few of our favourites. Here's our list.

The movie that helped her bag an Oscar in the Best Supporting Actress category, Jolie was at her best in this one. While the movie revolved around Winona Ryder, Jolie probably had a more interesting character. She was wild, honest and crazy as a sociopath who develops an amazing bond with Ryder's character.

The movie that got Jolie and Brad Pitt closer together saw them as a married couple who are actually trained assassins living a dual life. Problems arise when they are individually sent on a mission to kill each other. While Brad was amazing, Jolie was even better in this action-comedy.

Ever wondered how a tale would sound if heard from a villain's perspective? Jolie's Maleficent was exactly that. This Disney movie is the tale of Sleeping Beauty narrated from a villain's perspective. Jolie plays both - an evil but sympathetic character and you instantly fall in love with her. From Hollywood's Favourite Femme Fatale To Donning The Director's Hat, Here's Why Birthday Girl Angelina Jolie Is A Masked Superwoman!

This was a biopic that starred Jolie as  Gia Marie Carangi, a supermodel of her time. The movie narrated her life journey and Angelina looked extremely hot in this one. She perfectly portrayed all the struggles of the model's life including her drug addiction and AIDS diagnosis.

Two of Hollywood's brightest talents, Johnny Depp and Angelina Jolie come together for this romantic thriller. This fast-paced movie is about Jolie and Depp, both hiding their real identities. Its climax may even remind you of Dhoom 2.

(The above story first appeared on LatestLY on Jun 04, 2021 09:00 AM IST. For more news and updates on politics, world, sports, entertainment and lifestyle, log on to our website latestly.com).