Angelina Jolie Birthday Special: From Lara Croft to Thena, 5 of the Actress’ Best Action Roles You Need to Check Out!

Angelina Jolie has a sleuth of action roles under belt. From Lara Croft to Mrs Smith, she can do it all and look flawless in the process. She just has this certain aura around her that makes her so formidable, and that’s the best part about her. 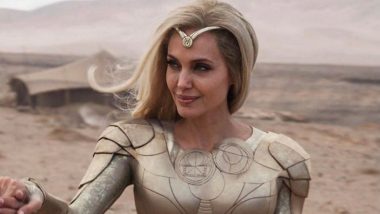 When talking about women in acting, Angelina Jolie is one star that has always been influential. Being a director, writer and an actor all-in-one, Jolie is one of the most talented people you will come across in the world of acting. She has constantly pushed the envelope with her dramatic roles, but also kicked a lot of butts with her action ones. Actress Angelina Jolie Calls Her ‘Eternals’ Character a Troubled Soul.

Angelina Jolie has a sleuth of action roles under belt. From Lara Croft to Mrs Smith, she can do it all and look flawless in the process. She just has this certain aura around her that makes her so formidable, and that’s the best part about her. So, to celebrate Angelina Jolie’s 47th birthday, lets take a look at five of her best action roles. Angelina Jolie Makes Surprise Visit at the Western Ukrainian City, Meets Children.

Jolie steps into the shoes of Evelyn Salt, who is falsely accused of being a Russian agent and has to go on a journey to prove that she isn’t. The film is packed with action and drama, but most importantly it has Jolie kicking butt and that’s all that really counts.

Marvel’s Eternals wasn’t a sure fire hit with everyone, but it still gave us Angelina Jolie as a superhero. Playing the role of Thena, she has the powers to form any weapon out of cosmic energy. Her character is quite deep as well and honestly one of the best parts about the film.

The Kung Fu Panda franchise is a whole lot of fun. These animated films are a staple of their genre, and the amazing cast just brings it all together. Jolie voices Tigress, who is as tough as they come and showcases some great leadership qualities.

Working with her ex-beau Brad Pitt, Jolies turn as Jane Smith in this film was a fun one. Seeing that both of them are assassins belonging to rival competitions, the husband and wife engage in a death match.

Say what you want about the quality of the films themselves, you can’t deny that Jolie was the perfect casting for Lara Croft. Embracing all the qualities of the character from the videogames, she nailed the aesthetic and personality of her and gave us some kickass action sequences.

Angelina Jolie is a very talented as an action star, and here is hoping she does more roles like these in the future. With this we finish off the list and wish her a very happy birthday.

(The above story first appeared on LatestLY on Jun 04, 2022 11:03 AM IST. For more news and updates on politics, world, sports, entertainment and lifestyle, log on to our website latestly.com).