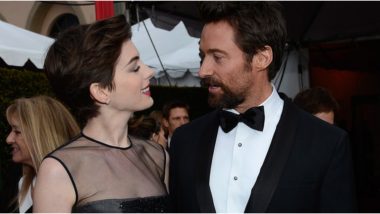 In Variety's series of celeb on celeb interviews, the latest names were Hugh Jackman and Anne Hathway. The two stars had a lot to talk about. They have featured together in the Oscar-nominated Les Misérables, for which, apparently, Hugh had said after first rehearsal that Anne will win an Academy Award. And she did win. They have also worked with Christopher Nolan and shared anecdotes about his sets, which has a no cellphones and no chairs rule. And, very importantly, they talked about Modern Love with each other. In the anthology show, Anne played the role of a woman suffering from bipolar disorder.

Hugh praised Anne's performance in the episode and added that his wife also loved it. "I do know someone who has bipolar; I never really talked to them in depth, and I’m sure there’s a lot of people like me who are going to watch your episode of “Modern Love.” I finished — both Deb and I just went, “Oh, that’s what it’s like.” It’s that immediate and that debilitating way that within a minute, you’re in bed, and then you’re there for three days," he said.

Anne responded, "One of the things that I learned after the episode aired was like me, like you, everyone has someone in their life that has either bipolar or something else — something that requires a little more space and education. That’s the thing that I can never understand: If we all love someone, why on Earth are there stigmas about it? A lot of people told me that this episode gave them an opportunity to talk about it." ‘Modern Love’ Season 2: Anne Hathaway Returns to Amazon Studios Anthology Series.

Anne added, "It’s not up to people who are already working so hard just to live to make space for themselves — it has to be the rest of us. We really need more representation of mental health in art if a 32-minute episode of a rom-com anthology is speaking to this issue and making people feel seen in a way that they never have been before."

For her role, Anne spoke to Terri Cheney, the woman whose story the episode is based on.

Like Hugh, Anne also revealed that she knows someone in her life who has next to no representation on the screen. "What led me to this character, and led me to want to say yes to this, was because I just wanted to show this person that I love them, and that I believe that they are worthy of love," the actress said.

(The above story first appeared on LatestLY on Jun 30, 2020 05:52 PM IST. For more news and updates on politics, world, sports, entertainment and lifestyle, log on to our website latestly.com).