Hollywood loves AR Rahman. Some of his memorable tracks from Bombay, Dil Se..., Kadhalan, Thenali, Alaipayuthey, Guru had made its way to some memorable Hollywood flicks. 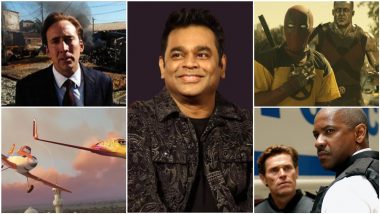 As AR Rahman turns an year older, let's talk a bit about how popular he is beyond borders. The composer who scored hits this year with Mimi and Atrangi Re, is a winner of two Academy awards, a unique feat for an Indian for scoring music for Slumdog Millionaire. He had also scored music for Hollywood films like Elizabeth: The Golden Age, 127 Hours, Million Dollar Arm, Couples Retreat, People Like Us, The Hundred-Foot Journey etc. And there were times when we watched a Hollywood film and suddenly an AR Rahman song or a piece of music composed by him pops up in the background to our pleasant surprise. Even when ARR is not the composer of the film. AR Rahman Birthday: 10 BGM Scores Composed By The Oscar-Winning Composer That Always Give Us Goosebumps.

Let's look at seven times Hollywood showed how much they admired AR Rahman's Indian music enough to borrow it for some very crucial scenes.

We often forget that Priyanka Chopra's debut Hollywood venture was this 2013 animated movie where she voiced an Indian plane called Ishani. During the scene where she brings the protagonist Dusty to India and visits the Taj Mahal enroute, the song "Tere Bina" from Guru is played during the scene.

This is a little cheat since this sports biographical drama, starring Jon Hamm and Suraj Sharma, has its music composed by AR Rahman, But many of the Tamil listeners were surprised when Rahman borrowed his own En Swasa Katre song "Thirakkatha" to play in the end-credits.

Watch the scene with "Swasame" from the movie:

Lord of War, a drama based on an arms dealer's life, features one of Nicolas Cage's best performances. In one of the most haunting sequences in the film, Cage's character is tied down and he sees his plane being stripped down by locals. The whole scene is set to the theme music of Bombay, which of course, you know is scored by Rahman. AR Rahman Birthday Special: 15 Brilliant Soundtracks of the Oscar-Winning Composer Which Surpassed the Failures of the Film and Lived On!

Watch the Scene below:

Of course, how can we ever forget the opening sequence of Spike Lee's heist thriller, starring Denzel Washington and Clive Owen? Even before Owen's narration sets in, we hear the familiar tune of "Chaiyya Chaiyya" from Dil Se... playing in the background.

Watch The Scene below:

One of the most memorable sequences in this real-life based drama is the scene where Dev Patel and Rooney Mara's character wordlessly and playfully flirt with each other to the opening beats of "Urvasi Urvasi" from Kadhalan.

Deadpool's (Ryan Reynolds) aide and cab-driver Dopinder (Karan Soni) is an Indian, and of course, love playing Hindi songs in his taxi. In a comic scene near the climax of this superhero sequel, his playing of Swades song "Yun Hi Chala Chal" results in a hilarious exchange between Deadpool and Cable (Josh Brolin).

PS: in the first Deadpool movie, Dopinder is seen listening to the Raj Kapoor classic "Mera Joota Hai Japani" from the movie Shree 420.

(The above story first appeared on LatestLY on Jan 06, 2022 11:52 AM IST. For more news and updates on politics, world, sports, entertainment and lifestyle, log on to our website latestly.com).