Army of Thieves Movie: Cast, Plot, Release Date – All You Need To Know About the Prequel to Zack Snyder’s Zombie Fest!

Army of Thieves follows Ludwig Dieter six years before Army of the Dead. Army of Thieves is set in the early days of the Zombie uprising where Ludwig is recruited by a mysterious woman to pull off a heist. Read on. 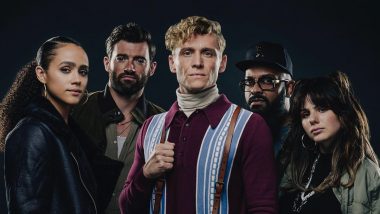 Zack Snyder just recently had his new movie, Army of the Dead, released on Netflix. In what’s being set up as a new franchise for Netflix, it was announced last year that Army of the Dead would be followed up by a prequel called Army of Thieves. Filming took place last year between October and December and it just received a brand new trailer showing us what we can expect from Army of Thieves. You can check out the trailer down here below. With a new trailer upon us, let's discuss all we know about the Army of Thieves and how it fits in the Army of the Dead universe.  Army Of Thieves: Zack Snyder Shares The First Look Poster Of The Netflix Film That Promises 'More Safes, Less Zombies' (View Pic).

Matthias Schweighöfer will return in the role of Ludwig Dieter. He will be joined by Nathalie Emanuel as Gwendoline, Guz Khan as Rolph, Ruby O Fee as Korina, Stuart Martin as Brad Cage, Jonathan Cohen as Delacroix, Noemi Nakai as Beatrix and John Bubniak as Christopher.

Matthias Schweighöfer who plays Ludwig Dieter in Army of Thieves will be directing the film. Zack Snyder Reveals The Cast Of Army Of Thieves, A Prequel To Army Of The Dead (View Pics).

Army of Thieves is written by Shay Hatten based on a story by Zack Snyder.

Army of Thieves currently has no specific release date but is confirmed for a 2021 release. The article will be updated when more information on the Army of Thieves is revealed.

(The above story first appeared on LatestLY on Jul 26, 2021 05:17 PM IST. For more news and updates on politics, world, sports, entertainment and lifestyle, log on to our website latestly.com).