Black Widow Teaser Trailer: Netizens are in Love With Scarlett Johansson's Russian Spy, Natasha Romanoff and think Her Solo Outing Would be Iconic 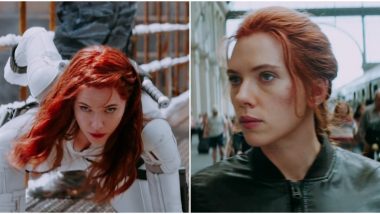 Did Marvel just decide to drop Black Widow's first teaser trailer? Hell, it did. Is it worth the long wait? It's probably better than what we anticipated. A major reason why Scarlett Johansson's death in Avengers: Endgame didn't yield an emotional reaction like Robert Downey Jr is for the fact that she was returning with her solo outing. Audiences were aware of her return unlike Iron Man, who was seen wearing his suit for one last time. Thanks to the immense success of DC's Wonder Woman, Marvel decided to go ahead with Black Widow's solo outing - a project that Johansson deserved much sooner. Black Widow Teaser Trailer: Scarlett Johannson’s Avenger Meets Her Crazy Spy Family in This Action-Packed Promo (Watch Video).

Black Widow's first teaser trailer introduces us to Natasha Romanoff's family and her origin. She vows to go back to where it all started and her journey looks promising and thrilling enough. Fighting with my Family actress, Florence Pugh plays her younger sister and their camaraderie looks fun and entertaining already. Netizens are equally excited about Johansson's action-packed teaser and think it's worth all the hype. Check out their reactions below...Marvel Posters of Black Widow, Wanda Vision and The Falcon and the Winter Soldier Unveiled at D23.

Guess the Person is Just too Overwhelmed! Marvel Has Produced Enough Good Content

It's So Good to See Romanoff Getting her Own Movie

We are Crying Already

me thinking about the fact that we see her FAMILY in the trailer,,, which means we are gonna WATCH HOW THEY GET RIPPED OUT OF HER LIFE I- #BlackWidow #BlackWidowTrailer pic.twitter.com/nUlD9rqEFS

Nat is looking SO GOOD! ❤pic.twitter.com/UCNuSDWHpk

Well the #BlackWidowTrailer caught me off guard. I’m impressed. 😍 pic.twitter.com/fAxWM2QPBH

This is a dream coming true for all those little girls who went to see iron man 2 in 2010, grew up wanting to be like her and are now beautiful young ladies. #BlackWidowTrailer ❤️💖

Thank you Scarlett Johansson for giving us the best version of Natasha Romanoff we could ask for https://t.co/9VCKKfjL0j

OMG CAN WE TALK HOW BEAUTIFUL SHE LOOKS IN THIS HAIRSTYLE #BlackWidowTrailer pic.twitter.com/7ozcIftTLT

The Wait for Very Long

FINALLY. TEN YEARS LATER. MY GIRL GETS WHAT SHE DESERVES. #BlackWidowTrailer #BlackWidow pic.twitter.com/4omzsp0g3J

Black Widow will hit the Indian screens on April 30, 2020, and we can expect another successful and profitable outing from the studio. Let's hope its success is able to give us more Black Widow movies in movies as bidding adieu to this powerful and badass character will always be so painful.

(The above story first appeared on LatestLY on Dec 03, 2019 02:43 PM IST. For more news and updates on politics, world, sports, entertainment and lifestyle, log on to our website latestly.com).