Cherry is a post-war drama film directed by Anthony and Joe Russo of Avengers: Infinity War and Endgame fame. Tom Holland plays the lead in the film, while it also stars Ciara Bravo, Jack Reynor, Michael Rispoli and Damon Wayans Jr. Cherry is streaming on Apple TV+ from March 12. 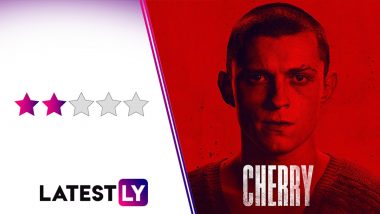 Cherry Movie Review: Cherry has been quite anticipated by fans (and yours truly) for being the film made by a director duo, who signed off on last decade with the biggest film and also the biggest hit. Like with Robert Downey Jr, Russo Brothers have found themselves in a situation where they have painted themselves in a corner. Instead of making another blockbuster, the brothers chose to make an indie film for Apple TV+, while bringing on board their Tom Holland as the lead, whom they also had the task to introduce in the MCU through Captain America: Civil War. Cherry: Tom Holland Sheds 30 Pounds for Russo Brothers’ Action Film.

Holland plays Cherry, a young man who was once an Army veteran. But in the beginning of the film, we see him trying to rob a bank along with other accomplices. We then go backwards in his life to see what prompted an ex-military guy to take to bank-robbing. We see Cherry's early life before his military listing, and how he meets Emily (Ciara Bravo), who becomes the love of his life.

A little misunderstanding in their relationship sees him enlisting in the army. We see his terrible experiences in the unit, his PTSD affliction post discharge, and later his drug addiction to cope with the PTSD, that affects his relationship with Emily, bringing us back to the first scene.

Cherry is based on the semi-autobiographical novel of the same name by Nico Walker, and is far darker than the audience-pleasing superhero shenanigans of Russos' last directorial.

Did they manage to pull it off? As an answer to this, I would like to imagine the frustration on Thor's face in Avengers: Infinity War, as he shouted "What did you do?" to Thanos, who just snapped half the universe out of existence. Russo Bros got everything right in place - a likeable actor in the lead, a terrific find to play his love interest, a dark but topical take on military PTSD and a premise that could have send Oscar nods to their direction. But like Thor in Infinity War, they just couldn't pull off that endgame right.

For, Cherry is mostly a bloated boring saga that is often confused about how it perceives to see itself. On one hand, it aims to be a harrowing take on PTSD and drug addiction, while on the other hand, Cherry tries to be quirky in its treatment with black comedy elements. From fourth-wall-breaking narration to big-fonted screen tags, Russo Brothers' try to give a fancy vibe to the film. Why there is also a bizarre shot of an anorectal exam, shown through the POV of the errr... rectum! The clash between the two styles doesn't bode well for the film.

Narrative-wise, I prefer the scenes of Cherry and Emily together over any scene of Cherry doing his own thing, including the Full Metal Jacket-inspired army scenes that feel unoriginal and uninspired (except offering the sight of Spidey boy wanking himself off in a toilet, while narrating his deed). But even that tragic romance isn't enough to contain the bloat that Cherry is burdened with its two-and-a-half-hour length. The one thing that still gets you through are the performances. Holland, looking a bit out of pace, still delivers a good performance as the troubled protagonist, but he is easily overshadowed by the fantastic Ciara Bravo, whose more presence in the runtime would have helped the film quite a lot. Tom Holland Calls MCU’s Spider-Man 3 the ‘Most Ambitious Standalone Superhero Film of All Time’ and We Are Now Both Scared and Excited!

- The Scenes Between Cherry and Emily

One good thing to look at Russo Brothers' followup to Avengers: Endgame is that it didn't turn out to be a Dolittle kind of disaster. Cherry definitely works in parts, mostly thanks to the chemistry between Holland and Bravo, but it is just that we expected more from the director duo than bringing old wine in a new, cracked bottle. Cherry is streaming on Apple TV+ from March 12.

(The above story first appeared on LatestLY on Mar 04, 2021 10:43 PM IST. For more news and updates on politics, world, sports, entertainment and lifestyle, log on to our website latestly.com).