As Chris Hemsworth celebrates his birthday on August 11, we look at some of his best moments as Thor. 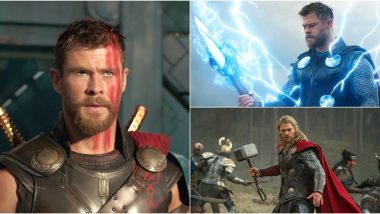 Chris Hemsworth is without a doubt one of the best fit for essaying the role of Thor. The actor with his chiselled bod and amazing gruff voice makes for the perfect God Of Thunder. Hemsworth has played the role of Thor in eight Marvel films till now. While the actor's most popular work remains to be his Thor stint, he has been a part of other action films such as Snow White and the Huntsman, Red Dawn, Blackhat, Men in Black: International and the recently released Netflix film Extraction. The Australian actor has managed to wow in all of these roles and there's no doubt that he can pull off action like no other. Chris Hemsworth Birthday Special: Let's Go Through His Adorable Red Carpet Moments with Wife Elsa Pataky (View Pics).

As the actor celebrates his birthday on August 11, we look at some of his best moments as Thor. Be it from wielding the Mjolnir for the first time to his funny banter with Hulk in Thor: Ragnarok, Hemsworth's superhero has always been a delight. The actor has managed to bring to this role, everything from sarcasm to comedy and action but of course. We certainly can't imagine any other actor showing this much range while kicking asses of villains like Ultron, Thanos or at times even his own brother, Loki. Here's looking at Chris Hemsworth's best moments as Thor.

Theatres erupted into a cheer on Thor's arrival at Wakanda during Infinity War. It was an unforgettable moment as Thor got a glorious entry into this war and it almost felt like with him on board, there was a chance at a win. We bet every time you watch this scene, it gets more epic.

It's amazing to watch Thor go beyond his limits and take on the full blast of a star whilst making an effort to create the Stormbreaker. It is this moment that shows us how truly powerful the God Of Thunder is and why he deserves that badass weapon.

It is unbelievable what loss of all hope can do to you and well, Hemsworth's Thor surely showed us what it'd be like to live without any worries and like there's no tomorrow. In Endgame, we meet a version of Thor that is simply put unimaginable.

Yes, Thor considers himself the 'strongest' avenger but what happens when he has to fight the actual strongest avenger aka Hulk. We can't thank Taika Waititi enough for giving us this amazing scene. Who can forget Thor's delight when he first sees Hulk on the battleground and says, 'He's a friend from work'.

Thor Gets His Power Back - Thor

In the first movie featuring Chris Hemsworth as Thor comes our favourite moment when Thor who's stuck on Earth without his powers gets his Mjolnir back. This is also the moment when Natalie Portman's Jane finally sees Thor in his full glory, yes, with the costume! Chris Hemsworth Says Shah Rukh Khan's 'Bade Bade Deshon Mein' Dialogue and You Will Love It (Watch Video).

We bet there are many more amazing Thor moments in the Marvel films where Chris Hemsworth truly made us say 'wow' but these are certainly our favourites. Do comment and tell us which are your favourite Thor scenes as we celebrate Hemsworth's birthday.

(The above story first appeared on LatestLY on Aug 11, 2020 11:24 AM IST. For more news and updates on politics, world, sports, entertainment and lifestyle, log on to our website latestly.com).