Daniel Radcliffe's essay on The Trevor Project was a reaction to J.K Rowling's multiple transphobic tweets where he assured that it has got nothing to do with him v/s her. 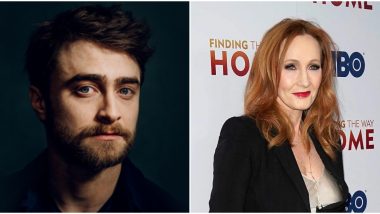 JK Rowling somehow manages to stern a controversy. Even as the world fights a pandemic and protestors in the US continue with their peaceful protests for the #BlackLivesMatter movement, Rowling managed to put her transphobia on display with her recent tweets. The author of your beloved Harry Potter books was severely trolled for her "views" and actor Daniel Radcliffe who shot to fame with the adaptations of her books decided to pen a powerful essay to condemn the controversy. Harry Potter's Cho Chang aka Katie Leung Reacts to JK Rowling's Transphobia Row With a Powerful Twitter Thread

Daniel's essay at The Trevor Project was a reaction to her multiple tweets wherein he stated that "Transgender women are women. Any statement to the contrary erases the identity and dignity of transgender people and goes against all advice given by professional health care associations who have far more expertise on this subject matter than either Jo or I.”

He also mentioned about his essay is not against Rowling and that the issue here is not between him and her but much deeper sadly. "I realize that certain press outlets will probably want to paint this as in-fighting between J.K. Rowling and myself, but that is really not what this is about, nor is it what’s important right now. While Jo is unquestionably responsible for the course my life has taken, as someone who has been honoured to work with and continues to contribute to The Trevor Project for the last decade and just as a human being, I feel compelled to say something at this moment," he added. JK Rowling Under Fire Over ‘Anti-trans’ Tweets; Netizens Unimpressed at Harry Potter Author’s Claim That Transgender Activism Is ‘Erasing the Concept of Sex’.

The star also addressed the Potterheads who are disappointed after hearing Rowling's views and think she has ruined what Harry Potter books meant to them by saying, "To all the people who now feel that their experience of the books has been tarnished or diminished, I am deeply sorry for the pain these comments have caused you. I really hope that you don’t entirely lose what was valuable in these stories to you,” he writes. “If you found anything in these stories that resonated with you and helped you at any time in your life - then that is between you and the book that you read, and that is sacred. And in my opinion, nobody can touch that.”

Rowling had earlier tweeted "I know and love trans people, but erasing the concept of sex removes the ability of many to meaningfully discuss their lives” and the same tweet received severe backlash on twitter with trans community reacting and publicly slamming the author.

(The above story first appeared on LatestLY on Jun 09, 2020 09:12 AM IST. For more news and updates on politics, world, sports, entertainment and lifestyle, log on to our website latestly.com).