British star Daniel Radcliffe, who rose to fame playing the wizard Harry Potter, says there are no plans at the moment for a Harry Potter 20th anniversary reunion. 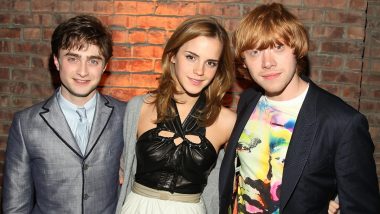 British star Daniel Radcliffe, who rose to fame playing the wizard Harry Potter, says there are no plans at the moment for a Harry Potter 20th anniversary reunion. The actor is sure there would be some celebration to mark the milestone in November, but adds that his work schedule would probably bar him from getting together with franchise co-stars Rupert Grint and Emma Watson, who played Ron Weasley and Hermione Granger respectively, reports aceshowbiz.com. The Lost City of D: Daniel Radcliffe To Play a Baddie in Sandra Bullock, Channing Tatum’s Romantic Comedy.

"I'm in the Dominican Republic at the moment, filming, and then I'm going to be busy, kind of working on bits and pieces until the end of the year. So, yeah, I don't know. I'm sure there will be some sort of celebration but I don't know if we will be getting together or anything. I'm sorry if that's a bit of a disappointment to anyone," Radcliffe told Entertainment Tonight. The actor says he has not seen any of the eight "Harry Potter" films, released between 2001 and 2011, he has occasionally caught glimpses while watching TV. Emma Watson Debunks Engagement Rumours; Harry Potter Actress Tweets ‘If I Have News, I Promise I’ll Share It’.

"I've seen bits on TV for seconds before I go, 'Uh!' Or if it's a scene that someone else is in I'll go, 'Oh, cool'," he said. Radcliffe has particularly fond memories of filming with Gary Oldman and David Thewlis, who played Sirius Black and Professor Remus Lupin respectively. "I have really, really fond memories of all my scenes with Gary Oldman and David Thewlis," he said.

(The above story first appeared on LatestLY on Jul 09, 2021 05:28 PM IST. For more news and updates on politics, world, sports, entertainment and lifestyle, log on to our website latestly.com).