Doja Cat Says She Would Like To Try Her Hand at Acting, Adds 'I’d Love To Be in Movies'

Doja Cat who gained popularity fast through her catchy and upbeat songs, said that she would love to take a break from her music career someday and give acting her all. Continue reading to know more about her thoughts on becoming an actor. 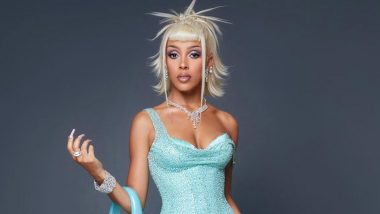 Rap star Doja Cat has already achieved huge success in the music business, and she would like to try her hand at acting one day. The Juicy hitmaker said: "I'd love to act. I'd love to be in movies. That's a massive want for me." Cat launched her debut album, Amala, in 2018 and she's already one of the best-selling rappers in the industry, reports femalefirst.co.uk.  Doja Cat Is Dripping Gold in This Schiaparelli Gown For BBMAs 2022 With A Bare Chest And Golden Nipple Pasties.

Despite this, she still looks towards rapper Nicki Minaj for inspiration and guidance. She told the June/July issue of Elle magazine: "I think her as a businesswoman really inspired me. The way Nicki can carry herself felt almost alien to me, because I was kind of a little runty kid, trapped in her room, just watching YouTube videos. And back then I was like, damn, that's dope."

Cat would actually love to take a step back from her music career to pursue some of her other interests, such as fashion and beauty. However, the rap star knows she needs to dedicate meaningful time to her ambitions.  Met Gala 2022: Nicki Minaj Puts On A Busty Display In A Black Tulle Gown.

She said: "It's just not realistic and it's not fun, to be honest, when you have to rush through things. So that is something I definitely want to do, but I want to do it only. So I would take a break from music."

The Boss B****, whose real name is Amala Dlamini, also recognises the importance of being authentic with her fans. She shared: "There's no formula to win, but I think there's a formula to lose. If you don't believe in what you're doing, people aren't stupid - they're going to pick up on that real quick. You just have to believe in yourself. It really sounds like some s*** out of The SpongeBob Movie, but it's true."

(The above story first appeared on LatestLY on May 25, 2022 06:00 PM IST. For more news and updates on politics, world, sports, entertainment and lifestyle, log on to our website latestly.com).