In a small but crucial role, Emma Thompson has been part of the Harry Potter franchise as the Divination professor Sybil Trelawney. Well, she might be one of the most irritating professors in the HP universe, however, she essayed the hippy and confused role with a lot of confidence. Check out her other best roles here. 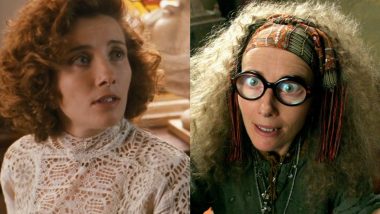 British actress Emma Thompson wears many titles like a boss lady. She's a screenwriter, activist, author, comedian, and one of the most acclaimed stars from the Hollywood space. Over the years, we've seen her in numerous films, taking up challenging roles and proving that she's here to slay. Emma is moreover known for her wit and the way she speaks (in real and reel life). She has always managed to grab the attention of the audience and so on the occasion of her born day today (April 15), we would like to flash five of her best roles until now. Disney Might Rope In Emma Thompson Alongside Emma Stone for Action Prequel ‘Cruella’.

This film is one of Thompson's best works as it has sex, sophisticatedness, forgiveness, hate and more. She essayed the role of Margaret Schlegel and stunned the masses. She even won a BAFTA and Oscar for this movie and so it tops our list. Watch!

Up next, we have a movie that has a fantastic message for all women out there. Sense and Sensibility is a lovely adaptation of one of Jane Austen’s earliest novels that saw Emma (Elinor Dashwood) on the route to becoming independent for the sake of her family in a restrictive society. The screenplay of this one was also penned by Thompson.

In a small but crucial role, Emma has been part of the Harry Potter franchise as the Divination professor Sybil Trelawney. Well, she might be one of the most irritating professors in the HP universe (except perhaps, Professor Umbridge, but that’s another tale), however, she essayed the hippy and confused role with a lot of confidence, making the character memorable. Shekhar Kapur Announces His Next With Hollywood Star Emma Thompson; Filmmaker Begins Rehearsals With the Academy Award Winner.

It was surely fun and entertaining to see Emma in an altogether different avatar adding her kinda sass to the flick. Thompson played the role of Agent O in the Men dominated franchise was a breath of fresh air. Helmed by Barry Sonnenfeld, Men in Black 3 is the third instalment in the MiB franchise.

In this animated film, Emma portrayed the role of motherly Mrs Potts. With her role as the cursed teapot, the legendary actress showed another side of her that many have not heard before. Indeed, she is blessed with superb acting prowess.

That's it, guys! These are some of the most loved roles of the actress from the movies which have been audiences and critics all-time favourites. Emma turns 62 today and right from featuring in classics to animated flicks, she has been an inspiration and how. We wish her more success in her career ahead. Stay tuned!

(The above story first appeared on LatestLY on Apr 15, 2021 09:24 AM IST. For more news and updates on politics, world, sports, entertainment and lifestyle, log on to our website latestly.com).