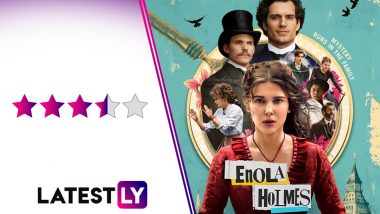 Enola Holmes Movie Review: The finale of the BBC series Sherlock left fans with mixed feelings by introducing Sherlock Holmes' sister all of a sudden and making her a villain, all the while having her brother be amnesiac about it. Enola Holmes(Millie Bobby Brown) has nothing to do with Eurus, the sister we met in the series. For one, Sherlock Holmes (Henry Cavill, making that jaw look even more impressive) knows she exists. He also has a warmer personality, not the sociopathic genius that we are kind of used to. Enola Holmes Trailer: Millie Bobby Brown's Clever Teen is Here to Steal Sherlock Holmes' Thunder With Her Wit.

But I digress. This movie isn't about Sherlock Holmes, though he has an essential role to play, and Cavill is being effortlessly charming. It is purely about Enola Holmes, based on the series of books written by Nancy Springer, focussing on the never-heard before teenage sister of the famous detective.

This film is based on the first book, The Case of the Missing Marquess. So those expecting a film clearly titled ENOLA HOLMES, to see Sherlock working his genius, be prepared to have your misogynistic selves jump in to an abyss of disappointment.

Returning to Enola's story, while her brothers were either being a famous PI or an influential government stooge, she was brought up by her idiosyncratic, fiery mother Eudoria (Helena Bonham Carter). But on her 16th birthday, Eudoria disappears on her, leaving only a few cryptic clues behind for her to crack.

Watch the Trailer of Enola Holmes:

The mother's disappearance brings Enola's estranged brothers, Mycroft (Sam Claflin) and Sherlock, back to their homes. Mycroft, who is bequeathed the property after their father's death, is shocked to see how their mother have run things and how she has brought up Enola. Since Enola is now his ward, Mycroft decides to make a lady out of her, and send her to the boarding school of Miss Harrison (Fiona Shaw, very effective).

Not interested in Mycroft's plans for her and also to find out where her mother is, Enola makes her escape to London. On the way, she finds a fellow runaway teenager, who happens to be Viscount of Tewkesbury (Louis Partridge), Marquess of Basilweather. He is being stalked by a relentless assassin (Burn Gorman).

In an interesting spin to the usual tales, it is Enola who keeps ending up saving him time and again, being his knight in shining armour. But before the hormones could come to play, Enola ditches him in London, as she seeks the truth about her mother, though what she finds there leaves her absolutely shocked.

Enola Holmes works well as a delightful adventure saga, a promising start to what could be an interesting franchise. The premise is just about decent with a predictable central mystery, but Enola Holmes works more for Brown's compelling lead, Harry Bradbeer's entertaining direction and its fun, feminist spin.

Speaking of the character, Enola may be a girl blossoming into a woman, but not the one the society wants to turn her into - just being someone's wife and have his kids. She wants her mother's independent streak and her brother's professional career. She may not have Sherlock's immaculate deductive skills - which kinda puts her in a fix in the climax - but thanks to her mother, she is well-read and is pro at deciphering codes and clues.

It also helps that while Enola is trying to figure out her life on her own terms, even England is in the midst of doing something revolutionary. An idea that doesn't go down well with the prudes of the era.

Yes, Enola's frequent fourth-wall breaking is irksome at times, but both the trope and the feminism is expected from Bradbeer, who has directing Fleabag. Also, Stranger Things fame Millie Bobby Brown (who is also the producer) is very much delightful as the lead. Netflix’s Stranger Things 3 Review: The Other-Worldly Adventures of Eleven and Co Just Got Bigger, Funnier and Ickier!

The rest of the cast supports well. Partridge is likeable as unconventional (for his time and thoughts) Marquess, who is a potential love interest for our protagonist. Sam Claflin does the pompous ass act quite well as the self-centred Mycroft. Adeel Akhtar makes his presence felt as Inspector Lestrade. Susie Wokoma is quite the scene-stealer in the two scenes that she appears.

As a film, Enola Holmes is very striking with its Victorian set designs (though there are a couple of scenes where CGI felt obvious), with Giles Nuttgens' lens adding a lovely hue to the frames.

Finally, Enola Holmes ends with a message that you don't really need a blast to make your voices heard. Just the right kind of noise in a place where decisions are made is enough to change the future. Something, this world needs to learn away.

With its heady mix of light-hearted YA elements and Brown's confident performance, Enola Holmes confidently spins its own path, even with Sherlock Holmes's huge shadow looming over it. Enola Holmes is streaming on Netflix from September 23.

(The above story first appeared on LatestLY on Sep 22, 2020 08:04 PM IST. For more news and updates on politics, world, sports, entertainment and lifestyle, log on to our website latestly.com).