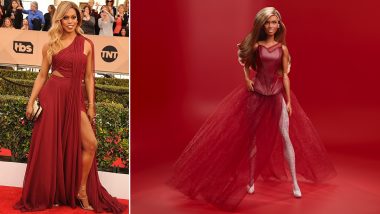 Ahead of her birthday, transgender actor and activist Laverne Cox has been recognised with her own Barbie. Laverne's doll is dressed in a deep red tulle gown over a sparkling silver metallic bodysuit. It also has bright blonde, voluminous hair to mirror Cox's signature style. Barbie: Dua Lipa Joins the Cast of Margot Robbie, Ryan Gosling's Film - Reports.

In conversation with People, Laverne expressed her gratitude, hoping the new doll would help people dream big. "I can't believe it. I love her outfit. What excites me most about her being out in the world is that trans young people can see her and maybe get to purchase her and play with her, and know that there's a Barbie made by Mattel, for the first time, in the likeness of a trans person," she said.

"I think in an environment where trans children have been used as a political football, when over 250 pieces of anti-trans legislation have been introduced in state legislatures all over the country in 2022 alone, and access to gender-affirming healthcare has been denied by policies signed into law in my home state of Alabama, in Arkansas and other states. That in this environment where trans kids are being attacked, that this can also be a celebration of transness, and also a space for them to dream, understand and be reminded that trans is beautiful," Laverne added. Barbie: Ryan Gosling, Simu Liu and Ncuti Gatwa Playing Different Versions of Ken in Margot Robbie's Film.

The Laverne Cox Barbie is available now at major retailers and MattelCreations.com, retailing for USD 39.99.