Netflix's Kingdom Writer Kim Eun-hee on Ashin of the North: Would Have Been Difficult To Include Ashin's Story In Season 3

Kingdom writer Kim Eun-hee on Tuesday said while it is inevitable to feel the pressure that comes with the popularity of the series, the team has tried to put their best foot forward with the special prequel episode Ashin of the North 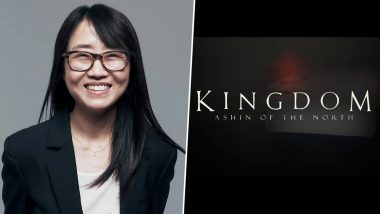 Kingdom writer Kim Eun-hee on Tuesday said while it is 'inevitable' to feel the pressure that comes with the popularity of the series, the team has tried to put their best foot forward with the special prequel episode Ashin of the North.

The acclaimed writer hopes that the special, which promises to reveal the details about the origin of the resurrection plant key to the original series, 'successfully conveys' their intention behind bringing the upcoming episode. Park Hae Jin’s Hindi Commercial For Chicken Noodles Without Chicken In The Korean Drama Old School Intern Is Going Viral (Watch Video)

Slated to stream on Netflix this Friday, Ashin of the North features South Korean stars Jun Ji-hyun and Park Byung-eun in the lead. "I would be lying if I said there was no pressure. I think the pressure is inevitable at this point. However, I do feel that it is nearly impossible to create something that if you show it to 100 people, all of them would love it," Kim Eun-hee said in a global press conference from Seoul, also attended by PTI from India.

The 49-year-old writer, also known for the popular time-travel investigative K-drama Signal, said it would have been difficult to include the story of Ashin, a woman seeking revenge for the death of her family and tribe, in the third season of Kingdom so they decided to come up with a special episode, which will focus on the people of the northern region of Joseon dynasty and its marginalised people.

"The resurrection plant has these certain cold properties. So I naturally looked into the northern areas of Joseon, and that's when I came across the marginalised people of the time that didn't belong anywhere. Ashin's story is very long and complex," she said, adding that telling the story in the spin-off is 'more audience-friendly.

One of the most respected writers in South Korea, Kim Eun-hee developed Kingdom, a period zombie thriller, from her webcomic series The Kingdom of the Gods, which was drawn by Yang Kyung-il. The original show, which features Ju Ji-hoon, Bae Doo-na, Kim Sang-ho, and Kim Sung-kyu, is set in Korea's medieval Joseon period where a crown prince is sent on a suicide mission to investigate a mysterious outbreak that leads him to a brutal truth that threatens the kingdom.

The series, which debuted its first season in 2019 and the second one in 2020, has been hailed globally for its nuanced portrayal of power, hunger, and exploitation in a period genre setting. Kingdom director Kim Seong-hun, who has also helmed Ashin of the North, said he was happy to return to the familiar setting while also introducing new characters.

"I don't think there's any director that would say no to the opportunity to direct something that Gianna Jun (Jun Ji-Hyun) would be starring in," he added.

Decoding the global popularity of the series, Kim Seong-hun said Kingdom stands out in the zombie genre.

"When you compare it to similar works in the genre, the Kingdom story in the series incorporates human history, the hunger, the greed for power, as well as the concept of 'Han' or anguish or sadness. "I believe that it truly creates a wonderful harmony that leads to a type of unique chemical reaction that I think was the key to why it was loved by so many fans around the world," the director said.

The prequel episode will reveal the secrets surrounding the resurrection plant with a rare purple flower, which has the ability to revive the dead but those who are brought back to life turn into bloodthirsty, flesh-eating monsters.

The plant is central to the story of the Kingdom as it is responsible for starting the plague in the medieval Joseon era that began in 1392.

Ashin is a descendant of a tribe residing in a northern border town of Korea and has vowed revenge for the loss of her loved ones. She clashes with Park Byung-eun's Min Chi-rok, who made a lasting impression in "Kingdom" season two as the head of the Royal Commandery.