Internet sensation Lilly Singh aka IISuperwomanII has released a video titled, If Bollywood Songs Were Rap. 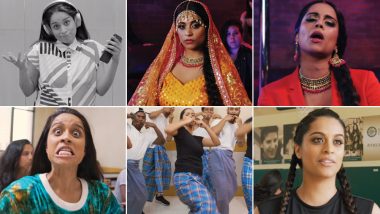 Rap music is loved across the globe but when Bollywood songs gets fused into such a genre, the feel is totally different. And especially watching Ranveer Singh rapping in Gully Boy, the graph of rap music in India has gone up. Now YouTube star Lilly Singh who is also known as IISuperwomanII, has dropped a video titled If Bollywood Songs Were Rap. The Superwoman has actually turned some of her favourite Bollywood songs into motivational rap anthems. She picked Bollywood songs like "Choli Ke Peeche", the recent one "Aankh Marey" from Simmba and more. Lilly Singh Lands Late Night Show Host Gig: Proud Bestie Priyanka Chopra Says 'Break Them Barriers Baby!'

The Indian-Canadian internet sensation Lilly Singh has touched many other serious aspects through her rap song. While sharing the video on YouTube she wrote, “I love Bollywood and I love rap music. So I decided to let my worlds collide by turning some of my favourite songs into rap songs! And while I was at it, I thought, why not make them little motivational anthems that speak to causes close to my heart? I hope you enjoy them as much as I enjoyed making them!” After Lilly Singh Comes Out as Bisexual, This Video of Priyanka Chopra Licking Her Finger Goes Viral! YouTuber Heard Saying 'I Am Aroused'.

Isn’t that totally amazing? And with this, we can also imagine what we can expect on A Little Late with Lilly Singh, NBC’s new daily night show where she’ll be seen as the host. So share your thoughts with us about this video in the comment box below.

(The above story first appeared on LatestLY on Mar 29, 2019 09:35 AM IST. For more news and updates on politics, world, sports, entertainment and lifestyle, log on to our website latestly.com).