Godzilla Vs Kong is doing extremely well at theatres despite all COVID-19 limitations. Buoyed by almost 60% collections from the South, the film has posted a healthy first-day total of Rs 6 crore. That's more than what Roohi and Mumbai Saga on their respective opening day. 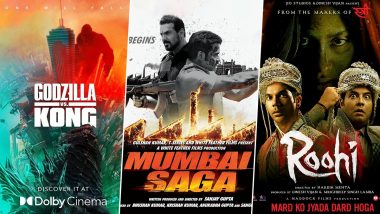 Godzilla Vs Kong released yesterday and has already managed to earn more than the latest Hindi releases. The Hollywood monster film earned Rs 6 crore on Wednesday. Roohi on day 1 had fetched Rs 3.06 crore while Mumbai Saga managed only Rs 2.82 crore. We have to bear in mind hear that theatres at key markets are running at 50% occupancy which has definitely affected the income. What worked in Godzilla Vs Kong's favour is the movie earned around 60% of it from down South. English movies always get more preference in that region than Hindi movies. That helped the film score a big first-day total in India.Godzilla vs Kong Movie Review: An Epic Monster Bash Dragged Down by a Disjointed Plot (LatestLY Exclusive)

Godzilla Vs Kong has been riding on crazy Tweet reviews which heaped praises on the film's visual effects and the face-off sequence between the two beasts. That could have helped in bolstering its collections across India.

Brutal monsters Godzilla and Kong get into a fierce battle while humans are busy plotting their end to reclaim the planet. That's the plot of Godzilla Vs Kong which is directed by Adam Wingard. It stars Millie Bobby Brown, Alexander Skarsgard, Julian Denison and more.

(The above story first appeared on LatestLY on Mar 25, 2021 12:59 PM IST. For more news and updates on politics, world, sports, entertainment and lifestyle, log on to our website latestly.com).