Harry Styles, BTS, Bad Bunny, Swift, Dua Lipa, Cardi B and Stallion performed their songs on the stage and made the ambience of the award night even more musical. 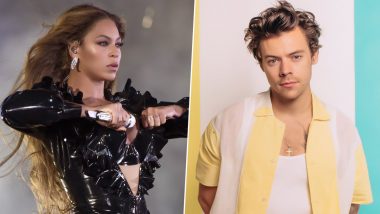 The starry night that was Grammys 2021 is finally over. The award ceremony was quite different this year with very few artists present at the venue and host Trevor Nova engaging the audience on a live stream. We saw the likes of Billie Eilish, Megan Thee Stallion, Taylor Swift, Post Malone, Roddy Ricch attend the award night amongst others while several celebrities sat back at their homes to receive the award virtually.  The ceremony took place at Los Angeles Convention Center, just opposite to the award show's usual home at the Staples Center. Grammys 2021 LIVE UPDATES: Billie Eilish Bags The Record of the Year Award.

Harry Styles, BTS, Bad Bunny, Swift, Dua Lipa, Cardi B and Stallion performed their songs on the stage and made the ambience of the award night even more musical. Beyoncé led the field with nine nominations and picked up the 28th Grammy win of her career. With this, she also broke the record for the most Grammy wins ever by a female artist and most Grammy wins ever by a singer. Harry Styles too received his first ever Grammy award this year for Watermelon Sugar. Grammys 2021: Taylor Swift, Harry Styles, BTS and More to Perform at the 63rd Annual Grammy Awards.

Record of the Year

"Everything I Wanted" — Billie Eilish

Album of the Year

Song of the Year

"The New Abnormal" — The Strokes

"Anything for You" — Ledisi

"It Is What It Is" — Thundercat

Beyonce returned to the Grammys and the legendary musician earned the award for her chart-topping tune 'Black Parade', which she released last year in honour of Juneteenth. She picked up four awards during this year's ceremony. Before exiting the stage, the 'Homecoming' star sweetly shouted out her kids, Blue Ivy Carter and twins Rumi and Sir Carter, whom she shares with Jay-Z.

(The above story first appeared on LatestLY on Mar 15, 2021 10:07 AM IST. For more news and updates on politics, world, sports, entertainment and lifestyle, log on to our website latestly.com).