Guardians Of The Galaxy Vol 3: Jennifer Lawrence or Elle Fanning Could Play a LGBT Character in this James Gunn Directorial

While Marvel has hinted about Captain Marvel being gay in their universe, there are chances that they may introduce a new LGBT character in Chris Pratt's Guardians Of The Galaxy Vol 3. 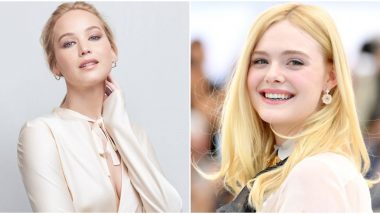 While James Gunn is currently filming Suicide Squad, he will also start working on Marvel's Guardians Of The Galaxy Vol 3. The sequel to Chris Pratt and Zoe Saldana starrer will explore the adventures of the Guardians squad and it's rumoured to focus on the origin of Rocket this time. While we read reports of the team having a cameo in Chris Hemsworth's Thor: Love and Thunder, a recent article in We Got This Covered suggests the possibility of Jennifer Lawrence or Elle Fanning's inclusion in the star cast.

The character in question here is of Moondragon and Marvel is reportedly eyeing Lawrence and Fanning for it. The character is a long-lost daughter of Drax in the comics and she's in the same-sex relationship with Phyla-Vell. Now, the official work on the casting is still underway but the production house is keeping its options open. They still have a lot of time to finalise the details as the completion of Suicide Squad sequel is still far from over. Guardians Of The Galaxy Vol. 3: James Gunn Reveals when He'll Start Shooting the Sequel and Fans are in for Some Disappointment.

Apparently, DC is also eyeing Jennifer Lawrence to play Courtney Whitmore in a Stargirl movie. And since the actress has just wrapped her contract with X-Men series where she played Mystique, there are chances that if DC and Marvel approach her at the same time, she would give her nod to the former.

(The above story first appeared on LatestLY on Mar 18, 2020 09:14 PM IST. For more news and updates on politics, world, sports, entertainment and lifestyle, log on to our website latestly.com).