Recently, Henry Cavill made headlines when he posted a lengthy message addressing some recent fan speculation about his personal life, affirming that he is "very happy in love" with his girlfriend Natalie Viscuso. 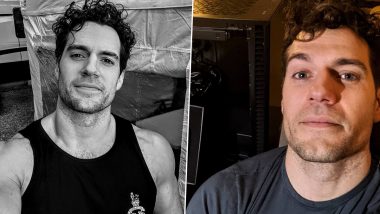 Henry Cavill, famously known for his mighty role as the Superman, is a gentleman off-screen. The actor enjoys a huge fanbase who love to see the actor in the action avatar. The actor has been a part of many hit action films, and is now adding Highlander to the list of his big-budget fantasy projects. The actor has earlier essayed titular character in the Netflix series The Witcher and a gentle version of Sherlock Holmes in film franchise Enola Holmes as well.  The Witcher Season 2: Its a Wrap for Henry Cavill’s Netflix Show After 115 Days of Shooting (Watch Video).

In Highlander, Henry has been cast in one of the lead roles in Lionsgate's reboot of fantasy action-adventure film. Director Chad Stahelski will be helming the film from a script by Kerry Williamson. The 1986 original movie featured actors Christopher Lambert, Sean Connery and Clancy Brown as immortal beings, hunting down each other to become more powerful, and it will be fun to see what role does Henry play in this film. Henry Cavill to Return as Superman! Actor Reportedly Signs a New Three-Film Deal with Warner Bros.

Henry enjoys playing powerful characters on the screen, but if you visit his Instagram, you will see how mushy and cute the actor is. Contrary to his on-screen personality, Henry is all about being adorable on social media. Check Out 7 of his cutest pictures on social media.

How Can Anyone Look So Handsome All The Time?

Can He Be Anymore Charming?

Superman Killing Us With His Gaze

We Suddenly Want To Hit The Gym As Well

Recently, Henry Cavill made headlines when he posted a lengthy message addressing some recent fan speculation about his personal life, affirming that he is "very happy in love" with his girlfriend Natalie Viscuso. According to People magazine, the British actor shared a selfie of him with Viscuso on his Instagram page Saturday and asked people to stop making negative assumptions about him on social media. He asserted that such assumptions cause harm to his loved ones.

(The above story first appeared on LatestLY on May 31, 2021 09:06 PM IST. For more news and updates on politics, world, sports, entertainment and lifestyle, log on to our website latestly.com).