Anna Todd, the writer of the fiction novel After, reveals the similarities between Harry Styles and Hardin Scott! 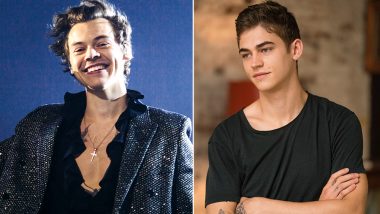 Based on Anna Todd’s successful fan fiction series on Harry Styles, After is being brought to the big screen by PVR Pictures. The film is all set to hit the theatres on 3rd May 2019. This romantic drama introduces us to the journey of a young woman who falls for a guy with a dark secret and the two embark on a rocky relationship. Directed and written by Jenny Gage, After is based on the 2014 fiction novel of the same name by Anna Todd. The movie features Hero Fiennes Tiffin and Josephine Langford in prominent roles, alongside Selma Blair, Shane Paul McGhie, Samuel Larsen, Khadijah Red Thunder, Swen Temmel, Inanna Sarkis, Peter Gallagher, Jennifer Beals, Pia Mia, Meadow Williams, Dylan Arnold. After: Here Are the Top Reasons to Watch the Hero Fiennes Tiffin and Josephine Langford Starrer Romantic Drama.

It is known to all that Harry Styles has a humongous fan following. Apart from being one of the key members of One Direction, the 24-year-old singer has also established a career for himself as a solo star in his own right. "Sign of the Times" was a UK Number 1 on its release and his self-titled debut topped charts around the world. He also received rave reviews for his first acting role as Alex in the hit film Dunkirk.

The main male character in the Anna Todd’s writing was, at first, inspired by one of the band’s popular singers, whose name’s initials matched Anna’s characters. “But Hardin Scott definitely became the exact opposite of what Harry Styles seems to be in real life. Once I wrote that first chapter, nothing about One Direction stuck in my head, besides their appearances. Nobody in my story is even in a band, no one sings. Nobody is even British in the book, except Hardin. Most of my characters have a bunch of tattoos. When I first started writing the book on Wattpad, Harry Styles had three little tiny tattoos and I had Hardin with his whole chest covered in ink. Then slowly Harry kept getting more tattoos, so that was fun because I just wrote it into the next chapter. Every time Harry would get another tattoo, I would mention one of Hardin's that looks exactly the same. When Harry's hair started getting longer, Hardin's hair got longer too.”

(The above story first appeared on LatestLY on May 04, 2019 01:34 PM IST. For more news and updates on politics, world, sports, entertainment and lifestyle, log on to our website latestly.com).