House Of The Dragon First Look: HBO Shares Concept Art from Game Of Thrones Prequel, Show To Start Filming In 2021!

The first look concept art of Game of Thrones prequel, House Of The Dragon is out. This one is said to the take viewers 300 years back in time even before the events of GoT and will introduce to House Targaryen. Check it out. 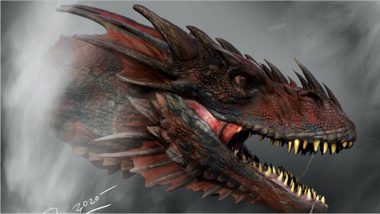 George R. R. Martin’s Game of Thrones was one of the most successful franchises ever made on Television. Fans literally went gaga over the series considering the twists and turns in its plot. While the said show ended with eight seasons, the world of dragons is all set to return to your screens once again. As HBO has shared the first look concept art of Games Of Thrones prequel titled as House Of The Dragon and it’ll surely remind you of Daenerys Targaryen. The peek sees two dragons. This spin-off is based on RR Martin’s 2018 book Fire and Blood. Game Of Thrones Prequel To Be Called House Of The Dragon, HBO Show Might Be Based on Fire and Blood.

House Of The Dragon will take viewers 300 years back in time even before the events of GoT and will introduce to House Targaryen. For the uninitiated, this is the same house that gave us Danerys Targaryen, mother of the dragon. Reportedly, it’ll be a 10-episode series that’ll be majorly in England at Leavesden Studios in Watford. So, after looking at the art pieces are you excited? House Of The Dragon: Game Of Thrones Spin-Off Eyes to Premiere in 2022.

Well, talking about the concept art, while the first picture gives us a full-length dragon, the second gives us a closer look at the fiery face. Along with the images, HBO also mentioned that the filming of the show begins in 2021. House Of The Dragon will see Paddy Considine playing the role of the lead, King Viserys Targaryen. Stay tuned!

(The above story first appeared on LatestLY on Dec 04, 2020 08:34 AM IST. For more news and updates on politics, world, sports, entertainment and lifestyle, log on to our website latestly.com).