How Ant-Man And The Wasp's End-Credits Is A Big Hint At What To Expect In Avengers 4, Reveals Director Peyton Reed

Ant-Man And The Wasp director Peyton Reed drops a huge hint that would make things easier to speculate about Avengers 4. 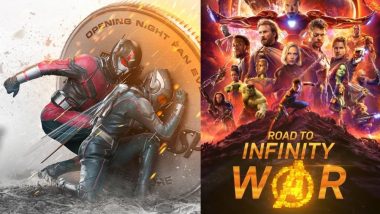 Ant-Man And The Wasp Drops A Major Hint That Could Be Pivotal To The Avengers 4. Picture Courtesy: Twitter

The minute we saw the first end-credit scene of Ant-Man And The Wasp, we knew how 'everything was connected' in the Marvel Cinematic Universe. However, little did we expect the maker of the film to drop such a huge hint that would make things easier to speculate about Avengers 4. In a podcast shared by Empire Film Podcast, the director divulged more on the mention of time vortex by Janet Van Dyke aka the original Wasp (played by Michelle Pfeiffer) that could prove meaningful for the fourth part of the Avengers.

“She (Janet) mentions tardigrade fields, she mentions time vortexes as these warnings to Scott about what not to get involved in. These things might prove valuable. They’re not just randomly spouted off at the moment. But, again, part of the fun of that was putting detail in there and throwing it out for the audience to guess which ones might be pertinent and which ones might not,” he said during the discussion.

Reed explained, “Oh, where are they now? What’s happening in this tag?. They’re doing some type of quantum experiment, there’s Luis’s van — throwing all these things at the audience immediately to catch them off guard. Janet’s in street clothes and he’s in the Ant-Man suit, Hope’s handing him something, what are they doing? Something about Ghost? And then, bam, just punching the audience in the gut with it. It felt like a very Ant-Man and the Wasp way to deal with this gigantic, dramatic happening at the end of Infinity War.”

This says a lot. Perhaps there is a possibility that the lost heroes could use Quantum Realm to travel back in time and unsnap Thanos' viciousness. While this insight opens a lot of possibilities of ways in which the heroes could return, we can only be absolutely sure of it, maybe in Captain Marvel or Spider-Man: Far From Home? Here's hoping!

(The above story first appeared on LatestLY on Aug 12, 2018 06:08 PM IST. For more news and updates on politics, world, sports, entertainment and lifestyle, log on to our website latestly.com).