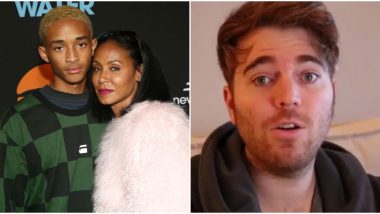 A disturbing video of popular YouTuber Shane Dawson recently surfaced online where he was seen 'sexualising' Will Smith's then 11-year-old daughter Willow Smith. The video which has surfaced online showed Shane looking at an 11-year-old Willow on a Disney poster while appearing to pretend to masturbate. After the video resurfaced online and received immense flak for the YouTuber, Shane released a video apologising to everyone where he also revealed that he put on a blackface several times in the past and apologised for not realising the gravity of his actions then. Reacting to the same, Will Smith's wife, Jada Pinkett Smith and son Jaden Smith slammed the YouTuber online. Will Smith Trolls Son Jaden Smith for Arriving Late at Aladdin Premiere in This Funny Video; Asks Elon Musk for Help.

Taking to Twitter, Jada Pinkett Smith wrote, "To Shane Dawson ... I’m done with the excuses." Jaden Smith also took to Twitter t react to Shane's video and wrote a series of harsh-worded tweets. He wrote, "HANE DAWSON I AM DISGUSTED BY YOU. YOU SEXUALIZING AN 11 YEAR OLD GIRL WHO HAPPENS TO BE MY SISTER!!!!!! IS THE FURTHEST THING FROM FUNNY AND NOT OKAY IN THE SLIGHTEST BIT." He further mentioned, "This Man Was Also Doing Black Face On The Regular. As The Youth We Need To Support Creators Who Support Us And Our Morals. This Is Not Okay."Will Smith Doesn't Watch Wife Jada Pinkett Smith's Uncensored 'Red Table Tal' Show.

To Shane Dawson ... I’m done with the excuses.

SHANE DAWSON I AM DISGUSTED BY YOU. YOU SEXUALIZING AN 11 YEAR OLD GIRL WHO HAPPENS TO BE MY SISTER!!!!!! IS THE FURTHEST THING FROM FUNNY AND NOT OKAY IN THE SLIGHTEST BIT.

Neither Will Smith nor Willow Smith have reacted to the following though netizens were surely left angered with Shane's revelations and his old offensive videos have now resurfaced on social media. In his apology video, he said, "‘I made a video six years ago talking about it and I gave excuses, I knew it was wrong, I knew I never wanted to do it again, but I didn’t do the work. I didn’t actually look into the history of it and why it’s so wrong, and why people were so upset."

(The above story first appeared on LatestLY on Jun 28, 2020 09:50 AM IST. For more news and updates on politics, world, sports, entertainment and lifestyle, log on to our website latestly.com).