Jennifer is done it all and we have to say aced it too. What sets Jennifer apart from her other colleagues is the fact that she's an extremely open personality off-screen. 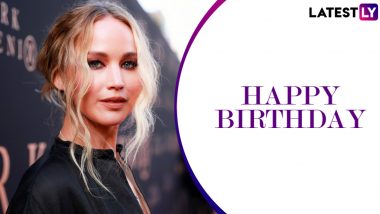 Jennifer Lawrence has been a discovery for Hollywood. From being a supporting actress on the sitcom The Bill Engvall Show to becoming an Academy Award-winning actress, J-Law has come a long way and certainly an inspiration to young actresses. J-Law celebrates her birthday on August 15 and as she turns 30, we look at the amazing work she has done so far. From superhero to space films, Jennifer is done it all and we have to say aced it too. What sets Jennifer apart from her other colleagues is the fact that she's an extremely open personality off-screen. Jennifer Lawrence is on Twitter! The Hunger Games Actress Took the Decision to Speak Out Against Racial Injustice.

Jennifer Lawrence is extremely fun in interviews and we love how she has the funniest answers to everything. Once in an interview with BBC One, Lawrence spoke about choosing a career in acting and said, "Oh yeah. It's the perfect job for a lazy person. It's really... I really found my niche." The actress is also known to be a prankster on the sets of the films she's worked. All in all, Jennifer is a total hoot of-screen but when it comes to her craft, the actress can portray every role with finesses. As we celebrate her birthday, here's looking at some of her best works.

This film is one of those that literally had everything going for it. With a brilliant star cast like Robert De Niro, Bradley Cooper and Jennifer Lawrence on board, there's hardly anything that could go wrong. Lawrence starred as the vivacious yet deeply troubled Tiffany and truly impressed everyone with her performance.

Another movie that had a stellar cast as Lawrence matched with the acting geniuses of Christian Bale, Bradley Cooper and Amy Adams. The 2013, David O Russell film had Lawrence essay a rather chaotic role and its amazing how she managed to make it so good and stood out among the rest of the cast.

One of the earliest films that showed the potential and brilliant range of the actress. This film also remains special for being the one that got Jennifer her first-ever Oscar nomination in the best actress category. Jennifer stunned everyone with her performance of that of a headstrong young woman.

Directed by Darren Aronofsky, Mother is a rather strange ride. The film stars Lawrence along with Javier Bardem, Michelle Pfeiffer and Ed Harris in lead roles. The psychological horror drama is an edge-of-the-seat watch for sure. The film was touted to be an 'audacious' effort and it should surely be on your watch list for Lawrence's performance. Guardians Of The Galaxy Vol 3: Jennifer Lawrence or Elle Fanning Could Play a LGBT Character in this James Gunn Directorial.

If you are a fan of Jennifer Lawrence, we bet you have already caught her amazing work. While we have listed some of our favourite films, do tell us in comments below, your most-loved works of the actress in her amazing career.

(The above story first appeared on LatestLY on Aug 15, 2020 11:20 AM IST. For more news and updates on politics, world, sports, entertainment and lifestyle, log on to our website latestly.com).