Joel Edgerton Birthday: From Star Wars Revenge of the Sith to Warrior, 5 of His Best Movies According to IMDb (LatestLY Exclusive)

Joel Edgerton is greatly known for his diverse roles and majority of his films are met with great fanfare as he constantly is able to steal scenes. So on this special day, we are taking a look at five of Edgerton’s best movies ranked according to IMDb. 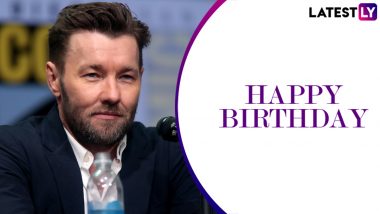 Joel Edgerton is an Australian actor who is known for his amazing range as an actor and is one of Hollywood’s top profile actors where he has gained a bit of a fan following. Edgerton is known for losing himself in his characters as he has never bought about a lackluster performance and makes sure to differentiate all his roles. Edgerton has even ventured into directing and writing as he received acclaim for his 2015 film, The Gift. Friends The Reunion: 5 Shows That Need a Reunion Special After Friends (LatestLY Exclusive).

Joel Edgerton is greatly known for his diverse roles and majority of his films are met with great fanfare as he constantly is able to steal scenes. So with his 47th birthday coming up, we are taking a look at five of Edgerton’s best movies ranked according to IMDb. Meryl Streep Birthday Special: 5 Most Popular Roles of the Acting Legend That Left Us in Awe!

This 2013 romantic drama is based on F Scott Fitzgerald’s novel of the same name and is directed by Baz Luhrmann. It has an all-star cast led by Leonardo DiCaprio who is joined by Tobey Maguire, Carey Mulligan, Joel Edgerton, Isla Fisher and Jason Clarke and follows the life and times of millionaire Jay Gatsby. Edgerton plays the role of Tom Buchanan who acts as the antagonist of the film who hates Gatsby. While the film received mixed reviews from critics, it was well embraced by the general audience.

This violent and grim neo-noir thriller directed by David Michod is inspired by the events which involved the Pettingill criminal family of Melbourne. It stars Ben Mendelsohn, Joel Edgerton and Guy Pearce with Edgerton playing the role of Barry ‘Baz’ Brown who is a close friend of pope. Animal Kingdom received overwhelming critical acclaim as it was praised for its great pacing and tense plot.

Directed by Kathryn Bigelow, it tells a retelling of the assassination of Osama Bin Laden which was carried out by USA. Edgerton plays the role of a Navy SEAL leader named Patrick Grayson. While his role is not that big, his appearance still makes an impact as he carries out the assassination at the end of the film. The war drama went onto win a lot of accolades and was another shining star on Kathryn Bigelow’s filmography.

The film that shot Edgerton to fame, Star Wars: Revenge of the Sith, is directed by George Lucas as he brings his prequel trilogy to a close. It showcases Anakin’s fall to the dark side and his transformation into Darth Vader. Joel Edgerton plays the role of Luke Skywalker’s uncle, Owen Lars, who takes in young Luke at the end of the film. From Castlevania to The Witcher, 7 Amazing Shows on Netflix You Need To Binge in Case You Are Down With the Glooms!

Directed by Gavin O’Connor, Warrior stars Tom Hardy and Joel Edgerton as estranged brothers whose entrance into a MMA contest makes them come to terms with each other. It’s an action packed film that provides a great family drama and really good performances by Tom Hardy and Joel Edgerton. It received great reviews upon its release and is considered as one of Edgerton’s best.

(The above story first appeared on LatestLY on Jun 23, 2021 09:11 AM IST. For more news and updates on politics, world, sports, entertainment and lifestyle, log on to our website latestly.com).