A favourite among popular filmmakers like Steven Spielberg, George Lucas, Robert Altman among others, John Williams has created some beautiful signature tunes for many movies, ever since he made his debut as a composer in 1958 with the film Daddy-O. 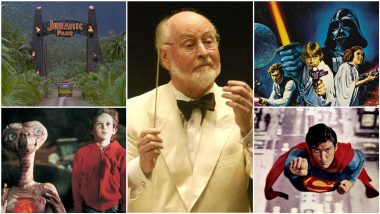 On many occasions, you don't even need a visual or a scene or a song to recognise your favourite movie. Sometimes just a few bars of notes are enough for your face to light up in recognition of which movie it belongs to. And thanks to the legendary music composer John Williams' penchant for creating some very recognisable scores, we have got some very iconic tunes that not only is persistent in our memories but also elevate the iconic statuses of the films they belong to. Turning 89 on February 8, 2021, let's come together the great John Williams Many Many Happy Returns of the Day.

A favourite among popular filmmakers like Steven Spielberg, George Lucas, Robert Altman among others, John Williams has created some beautiful signature tunes for many movies, ever since he made his debut as a composer in 1958 with the film Daddy-O. Steven Spielberg Birthday Special: From Jaws to Jurassic Park, 10 Highest-Rated Movies of the Director As per IMDB and Fascinating Trivia About Them.

In this special feature, we will look at 10 most iconic Hollywood movie tunes that every geek should be thankful to John Williams for coming up with.

Yup, Williams is responsible for the suspense-building tune playing in your mind, when you go to a beach and fear being eaten sharks there. He won an Academy Award for Best Original Score for his composition in this Steven Spielberg classic

This easily recognisable instrumental score played during the opening crawl of Star Wars films, makes even the bad movies of the franchise bearable. Also check out the "The Imperial March" score, another instantly recognisable tune from the film.

Close Encounters of the Third Kind

Whenever you hear this sweeping score, you inadvertently look up in the sky to see if the Man of Steel is flying around to save the day! Epic!

Raiders of the Lost Ark

Speaking of epic, how great is the score for Indiana Jones! A brilliant use of orchestra here to create a fantastic caller tune for an incredible hero.

Innocent, mellifluous and inquisitive - the score Williams composed for this Steven Spielberg masterpiece is up for the ages!

This iconic tune not only captures the mischievous nature of its little lead, but also the spirit of Christmas, the festival in which the movies are set around. Home Alone Reboot: Macaulay Culkin Reacts to the Petition to Re-Cast him as 'Kevin McCallister', Suggests Some Corrections.

Steven Spielberg's Jurassic Park may be about the return of gigantic prehistoric creatures, but its very recognisable tune speaks more about man's curiosity and wonderment for the amazing nature around him. Gives goosebumps every time we hear this! Jurassic World Camp Cretaceous Review: The Breakfast Club Meets Dinosaurs in Netflix’s Thrilling Animated Spin-Off Series.

The "Hymn to the Fallen" is a brilliant tribute to the valour of the soldiers fallen during the terrible World War II.

Harry Potter and the Philosopher's Stone

Magic! That's the word that lingers in your mind everytime you hear this fabulous piece of music John Williams had composed for the money-spinning Harry Potter franchise. We are even willing to bear the terrible Fantastic Beasts spinoffs when this tune plays up!

(The above story first appeared on LatestLY on Feb 08, 2021 07:47 PM IST. For more news and updates on politics, world, sports, entertainment and lifestyle, log on to our website latestly.com).