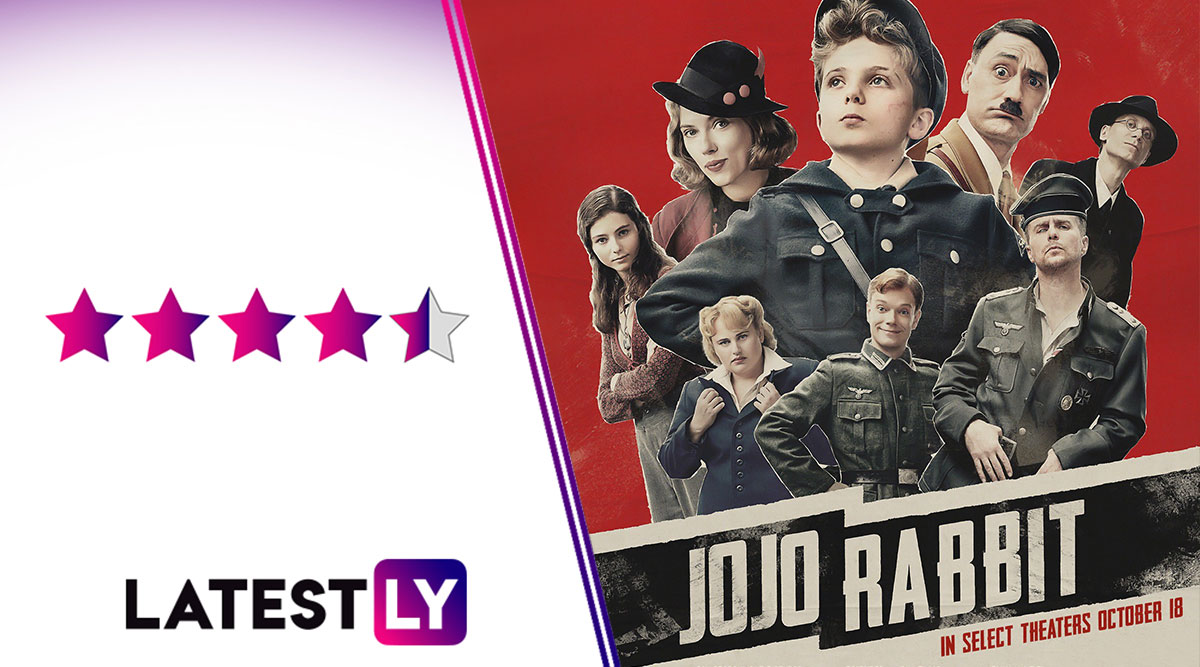 Jojo Rabbit Movie Review: Taika Waititi got worldwide recognition with his Marvel outing, Thor: Ragnarok. Ragnarok reinvigorated the Thor series and is, in my humble opinion, the funniest film in the MCU. Well, that's what you get when you give reins to the man who made the darkly comic and entertaining What We Do In The Shadows. But Taika Waititi isn't someone who is just about the smart laughs; he is also someone who can meld humour into drama and create a very heartwarming narrative. Watch his past films like Boy and the excellent Hunt for the Wilderpeople. Or better, hop to the nearest theatre and watch Jojo Rabbit. Taika Waititi on ‘Jojo Rabbit's Oscar Nomination, Michael Fassbender’s Comedy Potential and More.

Taika's latest movie is a satirical take on how easy it is for a power-hungry government to brainwash its citizens into believing anything ludicrous. And it is also a touching reminder that despite our gullible exterior, humanity resides in every one of us. Surprisingly, unlike what the trailers portrayed, it is the dramatic portions, more than the black humour, that makes Jojo Rabbit such a wonderful watch.

Jojo Rabbit is about Johannes "Jojo" Betzler (Roman Griffin Davis), a ten-year-old child living in an unnamed city in Nazi-Germany during the fag-end of World War II. He is obsessed with the Nazis and even has Adolf Hitler (Taika Waititi) as his imaginary friend. Living with his charming mother Rosie (Scarlett Johansson), Jojo is sent to Hitler Youth training camp, headed by a cynical Captain Klenzendorf (Sam Rockwell), and his assistants, Finkel (Alfie Allen) and Fräulein Rahm (Rebel Wilson).

In an attempt to prove that he isn't as cowardly as his father who goes missing during a battle, or a 'rabbit' as he is being teased, Jojo gets injured and is left scarred in the face. Sent back home, Jojo is shocked to find out that his mother, a secret anti-Nazi, is hiding a young Jew girl Elsa (Thomasin McKenzie) in the house.

Wanting to learn more about how devious Jews can be (as he has been always told), Jojo comes out with an uneasy pact with Elsa. He will help in hiding her, while she helps him with his book that he is writing on Jews. In the process, Jojo discovers the feeling of love and learns that everything he had admired and respected about his Fuhrer's teachings is nothing but a bundle of hateful crap.

Well, what can you say more about Jojo Rabbit, other than the fact that it is a movie that deserves to be watched in these times? In an era, where some of the major countries in the world, including ours, indulge in false propaganda to create abhorrence about a community just to show another in Godly light, Jojo Rabbit is a quirky reminder that it is the people who make the despots rise to the top. Watch the opening montage of real-life footage of Hitler and tell me if it doesn't remind you of the euphoria someone closer home is making in the country right now. And it is also a cue that it is we who have to kick the hateful Hitler within us out of the window. The choice, and its consequences, are on us. Taika Waititi Says Jojo Rabbit Star Scarlett Johansson Has a Goofy Quality That He Wanted to See in a Film.

The most wonderful aspect about Jojo Rabbit is that Taika makes its three plot elements - a Nazi satire, a mother-son drama, and an unlikely friendship saga - mesh well to go beyond its satirical framework and create a movie for all times. The humour is funny, but it doesn't make you forget the severity of the setting the characters find themselves. Watch out for that scene where Gestapo agents (led by a terrific Stephen Merchant) arrive at Jojo's house for an unexpected search. The scene is hilariously played but it doesn't lose the nerve-racking tension the moment is supposed to have.

Or take how Taika plays the Adolf character. It appears as very juvenile and even likeable at first, just as how a child would imagine his imaginary friend would be. There is even a hilarious moment when Hitler suggests to Jojo, after discovering Elsa, to burn the house and blame it on Churchill. Again, where have we heard this passing-the-blame to Nehru, I mean, Churchill, before?

As the movie progresses, and Jojo begins to realise that he has been fed inanities all along, his Hitler friend becomes more aggressive in the way he talks to Jojo, turning into a bully. Taika knows how to play around with black humour, and in what quantity, and it is in ample display in Jojo Rabbit.

The reason, though, why Jojo Rabbit owns your heart is for its dramatic, bonding moments. Be it any scene involving Jojo and Rosie, or Jojo and Elsa, there are so much warmth and sensitivity, along with light-hearted touches, put in those sequences. And just when we get lost in the proceedings, Taika manages to pull the rug under our feet, like that one horrifying scene involving the main character and the town square, that doesn't focus on showing the actuals but shatters you with its context and imagery.

The third act is, especially, brilliant as the director shows the disturbing consequences of what battle does to the people around you, without losing his trademark quirkiness. Fantastically shot with some tense moments, the scene also leaves you choked at times. While Bollywood war films often harp on the josh that battles raise in you, movies like Jojo Rabbit and 1917 go the other way - they lay before you the toll war takes on human lives and makes you realise the futility of it all. That said, the conclusion will leave you with butterflies in your stomach, watch the film to know what I mean there.

Then there are the lovely characters and the performances. Roman Griffin Davis's natural act captures the precariousness and the naivete of Jojo extremely well. He is particularly good in the aforementioned Town Square scene; his expressions capturing the horror of the moment pretty well. Thomasin McKenzie blends ethos and wittiness in her performance of a girl, who has lost everything yet not her ability to laugh in the face of peril.

But Jojo Rabbit is owned by Scarlett Johannson's Oscar-nominated stellar act. Rosie is a hero in her own right, working hard against the anti-humanity forces that she claims to a part, while also being the most awesome mother to her gullible, trying to change him subtly. Scarlett as Rosie is pretty amazing in every scene, with the dinner table sequence and her speech on love being my favourites.

In the supporting cast, Sam Rockwell is a treat to watch every time he appears as the dispirited former Nazi frontman. Young Archie Yates, who plays Jojo's second-best friend Yorki, is an absolute delight, often stealing the show. Then there is the director himself, who nails the craziness of a childish Hitler pretty well.

Speaking about the technical aspects, cinematographer Mihai Mălaimare Jr gives some very textured still frames in the movie that speak out a lot. The production design is also terrific. Michael Giacchino's score is another huge asset for the film, and the choice of songs used is brilliant.

- A Near-Perfect, Winning Narrative on Humanity and Love

- The Performances, Writing and Direction

- Some Slack of Pace in Between

Jojo Rabbit is a bittersweet coming-of-age story, an anti-war drama and a black satire on the Nazi elements around us, and it nearly excels in all the three story-frames. It may draw you in with the promise of a barrel of uncomfortable laughs, but Taika's film will leave you with the most difficult feeling to hold on to - love.