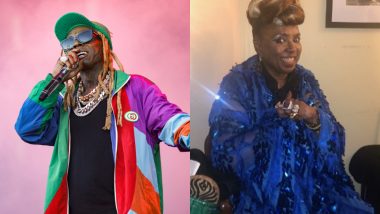 On May 10, 2020, we lost Betty Wright. She was 66 and was suffering from cancer. The soul singer's contribution to music will forever keep her spirit alive. She was fondly called Miami's First Lady of Soul. She has inspired so many singers across the globe, including rapper Lil Wayne. He recently paid a heartwarming tribute to the late singer on Instagram where he wrote that she showed him how to believe in himself when others doubt. In an interview with Variety, Lil Wayne opened up about his relationship with Betty Wright.  He said, "Ms. Betty was like a mom. I became a fan as a kid because my mom would listen to her s–t loud as f–k in the crib while she’d be getting dressed,"

He further elaborated, "What stuck out was the talking on the records that Ms B would so famously do. Another interesting and consistent fact about it all is that whoever played her songs knew every word of the talking part! As a kid, you’d have to sit there and have them try to act like Ms B and talk to you like that. It obviously stuck with me." RIP Betty Wright: John Legend, Snoop Dogg and Others Pay Tribute for the Grammy-Winning Singer.

Mama B idk what this world would’ve been without u. I do know that my world wouldn’t be what it is today without your pure blessing. You showed me how to believe in myself when others doubt. How to be me even when it may not be the me that they want. How to dig deep, then find it trust it do it. U gave me care on top of confidence. U gave all of u to and for all of us. I’d give my all for one last chance to say goodbye. Life is short,love is forever. I love you ma.

Lil Wayne met her when he moved to Miami. "She was nothing but a mother ever since. Not only to me but my friends and my daughter as well. She’s more than missed by myself and a world of others. I have a lot to thank her for but I thank her most for my musical confidence! I can do anything," he concluded.

(The above story first appeared on LatestLY on Jul 05, 2020 03:54 PM IST. For more news and updates on politics, world, sports, entertainment and lifestyle, log on to our website latestly.com).