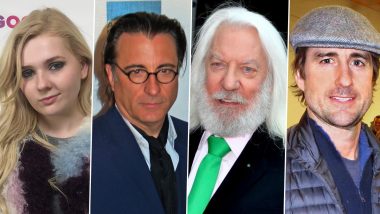 Abigail Breslin, Luke Wilson, Andy Garcia and Donald Sutherland are on-board for the courtroom drama Miranda's Victim helmed by Michelle Danner, with production underway in New Jersey, reports Deadline. Deadline states that the film, written by J. Craig Stiles and George Kolber, tells the true story of Trish Weir, who in 1963 was kidnapped and brutally raped by Ernesto Miranda. Committed to putting her assailant in prison, Trish's life is destroyed by America's legal system as she triggers a law that transforms the nation. Miranda's Victim: Abigail Breslin, Luke Wilson to Star in Michelle Danner's Courtroom Drama.

Wilson is set to play Lawrence Turoff, the country prosecutor that convinces Trish to testify and helps her bring her aggressor to justice, with Garcia as public defender Alvin Moore, who takes on Miranda's case, and Sutherland as Judge Wren, who convicts Miranda for the rape of Weir. Danner and Kolber are producing alongside Valerie Debler, Brian Drillinger and Alexandra Guarnieri.

The production company involved is Navesink River Productions. Talking about the project, Danner said in a statement accessed by Deadline: "The first time I read George Kolber's riveting script and learned about Trish's experience, it moved and inspired me. Miranda's Victim puts us at the intersection between a brutal rape case and and a national movement for civil liberties." Silent Night: Joel Kinnaman to Star in John Woo's First Hollywood Movie Since 2003; Film To Be An Action Thriller With No Dialogue.

Miranda's Victim is Danner's seventh directorial project, and comes on the heels of her action-thriller The Runner, about a troubled teen forced by police to go undercover to expose a dangerous drug kingpin. Starring Edouard Philipponnat, Cameron Douglas, Elisabeth Rahm, Eric Balfour and Nadji Jeter, the film has enjoyed a successful run on the festival circuit and is slated for release this year.

Additional feature credits include 2006's How to Go Out on a Date in Queens, starring Jason Alexander, Ron Perlman and Enrique Murciano; the 2012 psychological thriller Hello Herman, starring Norman Reedus; and the 2016 comedy The Bandit Hound, with Judd Nelson, Lou Ferrigno, Catherine Bell and Joe Flannigan.

(The above story first appeared on LatestLY on May 29, 2022 02:26 PM IST. For more news and updates on politics, world, sports, entertainment and lifestyle, log on to our website latestly.com).