Moon Knight: Is George Clooney Directing Oscar Isaac for an Episode of the Marvel Series? - Reports

Moon Knight is an upcoming Disney+ show produced by Marvel. It stars Oscar Isaac as the titular Marvel Superhero while he is joined by Ethan Hawke. 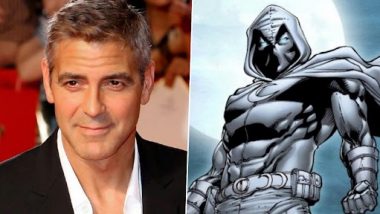 Moon Knight is just about finish off its production and fans are getting excited to even get a bit of information about this show. The latest bit of info comes from the website The Ronin, which talks about how it has learned that George Clooney might have directed an episode of Moon Knight. The report talking about George Clooney's involvement. Moon Knight: Mark Ruffalo’s Leaked Picture Hints His Appearance As Hulk in Disney+ Series; Here's How the Actor Responded!

The directing team for Moon Knight consists of three talented individuals, Mohamed Diab, Justin Benson, and Aaron Moorhead. They all have some really great projects to their name and if the addition of George Clooney turns out to be, then this will be a great addition to the project.

George Clooney isn’t new to directing as he has directed many films in the past like The Monuments Men, Leatherheads, The Midnight Sky and more. Moon Knight will be the second collaboration between George Clooney and Oscar Isaac as the duo worked on the film Suburbicon. Until anything is confirmed, we still have to take this news with a grain of salt. We have even seen previous rumours that have suggested the involvement of Mark Ruffalo appearing in the show. Moon Knight: Mark Ruffalo’s Leaked Picture Hints His Appearance As Hulk in Disney+ Series; Here's How the Actor Responded!

For more announcements on Moon Knight and possibly a first look at the show, you can expect that during the Disney+ Day on November 12, 2021.

(The above story first appeared on LatestLY on Oct 15, 2021 10:21 AM IST. For more news and updates on politics, world, sports, entertainment and lifestyle, log on to our website latestly.com).