Nick Jonas Birthday: From Jumanji to Scream Queens, the Best Acting Credits on His Filmography 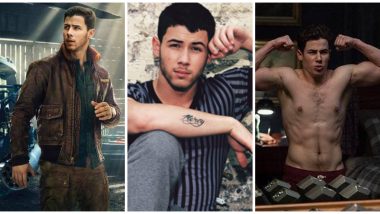 Nick Jonas turns 28 today. And he has already married one of the most beautiful and talented women of the world, Priyanka Chopra, and he has an amazing career filled with opportunities. Forbes 30 Under 30. Where you at? Well, the majority of the fans of Nick love him for his singing capabilities. But, there are also many who love him for his acting chops. Of course, Nick, along with his brothers, first rose to global fame with the Disney show, Jonas. Priyanka Chopra Jonas Shares a Romantic Picture with Her ‘Forever Guy’ Nick Jonas and It’s Just Unmissable!

Over the years, he has garnered multiple notable acting credits. Today, we are going to talk about the times when Nick Jonas impressed us with his choice of roles and the craft of acting. Nick Jonas Posts A Spectacular Throwback Pic Of His Ladylove Priyanka Chopra Jonas At A Beach!

Dwayne Johnson rebooted the hit '90s film Jumanji. In the first film, Nick played a supporting role but extremely important to the plot. In the sequel, the actor returned to reprise the role, this time in an extended capacity.

Watch This Scene From Jumanji:

Nick Jonas had a recurring role in season 1 of the horror-comedy series by Ryan Murphy. It is an underrated series and you must watch it if you haven't already. Class apart performance by Emma Roberts. And Nick was another great thing about it.

He played the role of Boone Clemens who pretends to be a closeted gay man. Yes, pretends to be closeted while he is straight. It was one of those crazy shows. Every scene featuring Nick was a laugh riot. BTW, Murphy has confirmed that three years after the cancellation, he has started working on season 3. Yay!

Watch His Scenes From The Series Here:

Nick Jonas' acting chops are on full display here as a fat brother. The movie's plot carefully navigates the torturous, and sometimes fatal, custom of hazing in college fraternities. There is an emotional story of two brothers embedded in this chaos.

Watch The Trailer For Goat Here:

This drama series might have only lasted three seasons, but it is deeply impactful. On the contrary to Scream Queens, in Kingdom, Jonas' character Nate Kulina was actually a closeted gay boy. You can see the range of acting, thanks to this. While in Scream Queens, the actor gets to be playful with his character, in Kingdom he brings poise to it.

Watch This Interview Where Nick Explains The Complexity Of His Character In Kingdom:

In 2020, Nick will release the join memoir with his brothers, titled, Blood. The Jonas Brothers reunited in 2019 with the hit song "Sucker". On the acting front, Nick will play the supporting role in Chaos Walking a sci-fi film set in a world where women have become extinct. Nick will be seen in a lead role in The Blacksmith, playing a weapons expert, alongside Laurence Fishburne.

(The above story first appeared on LatestLY on Sep 16, 2020 11:20 AM IST. For more news and updates on politics, world, sports, entertainment and lifestyle, log on to our website latestly.com).