Noah Baumbach Birthday: From Marriage Story to Frances Ha - A Look At the Director's Best Works

The director's work has come into the eyes of the Academy not only once but almost three times that he has received a nomination, one of the most recent being Marriage Story starring Scarlett Johansson and Adam Driver. 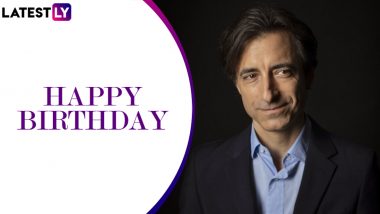 Noah Baumbach is one of the most talented filmmakers of his generation and his body of work is enough to stand by this statement.  The director has made a mark in independent cinema and Baumbach is known for his contemporary style of direction. Baumbach's style of direction is very personal and affecting and leaves a great deal of impact. The director's work has come into the eyes of the Academy not only once but almost three times that he has received a nomination, one of the most recent being Marriage Story starring Scarlett Johansson and Adam Driver. Marriage Story Movie Review: Scarlett Johansson and Adam Driver's Emotionally Charged Performances in This Separation Drama Will Leave You Moist Eyed.

As for Baumbach's career, the filmmaker has directed 10 films in the last twenty-five years and as the director celebrates his birthday on September 3, we look at his best works. Some of them are also in collaboration with his partner Greta Gerwig who is also an acclaimed director. The Brooklyn-born filmmaker made his writing and directing debut in 1995 at the age of 26 with Kicking and Screaming, a comedy about four young men who graduate from college and refuse to move on with their lives. From that film to Marriage Story, Baumbach has come a long way. Here's a look at his must-watch films.

One of the best collaborations of Noah Baumbach and Greta Gerwig is this gem. Gerwig stars as a free-spirited dancer in an unforgiving NYC. Gerwig's character defines charming and chirpy and she's a delight on screen. There's a cathartic quality to Baumbach's works and this one seems extremely personal with its emotional approach. Considered to be one of Baumbach's best work, the film has made it to several must-watch lists.

Sure the film had a Kramver Vs Kramer hangover but it was so much more thanks to Adam Driver and Scarlet Johansson's moving performances. Beautifully written and directed, Marriage Story took a look at finding love in separation as a couple heads for divorce.

The Squid and The Whale

Baumbach's autobiographical indie The Squid and the Whale is one of his most-loved works and for the right reasons. The filmmaker captured the vibe of 1986 Brooklyn and his teenage years in a beautiful film revolving around two brothers and their parents' difficult divorce. Jeff Daniels is absolutely brilliant in this one.

Baumbach's debut film certainly needs to be in the spot for his top 5 films given its genuine storytelling approach. The film revolves around a group of friends navigating their future post graduation. The film is witty shows Baumbach's emerging talent before he took over the indie scene with his brilliance. A spirited cast and nuanced storytelling make this film a charming ride. When Laura Dern Cried Hard After Reading Netflix's 'Marriage Story' Script.

Noah Baumbach knows how to make films that are impactful with simplicity. The director doesn't need big-budget sets and foreign locales to make his work look extraordinary. He can make a stuffy New York as interesting and amazing as any other place and we love him for that. Here's wishing the talented director a very Happy Birthday!

(The above story first appeared on LatestLY on Sep 03, 2020 11:21 AM IST. For more news and updates on politics, world, sports, entertainment and lifestyle, log on to our website latestly.com).