Onward is a Disney-Pixar animation film that is directed by Dan Scanlon. The movie stars the voices of Tom Holland, Chris Pratt, Julia Louis-Dreyfus, and Octavia Spencer. 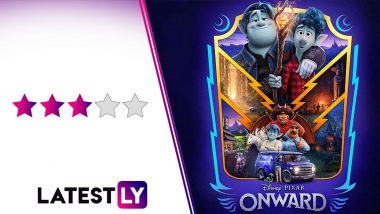 Onward Movie Review: In Onward, we visit an Earth that isn't inhabited by humans but magical creatures like elves, wizards, trolls, unicorns, dragons, manticores etc. Magic used to be in the air, but over the years, the inhabitants got more used to relying on electricity to get their things done. In the present times, pretty everyone has forgotten how magic works. We then meet Ian Lightfoot (Tom Holland), a socially awkward elf, who resides in the picturesque town of New Mushroomton. Onward Movie Review: Critics Say Tom Holland, Chris Pratt's Fantasy Adventure Is Emotionally Engrossing.

Ian, who lost his father when he was a baby, lives with his mother Laurel (Julia Louis-Dreyfus), and his irresponsible elder brother Barley (Chris Pratt). Barley is obsessed with this world's version of Dungeons and Dragons and the history of magic. He also wants to protect every artefact in their town that once used to be associated with phenomenon.

On Ian's 18th birthday, Laurel presents him and Barney a mysterious gift that their father left behind for them. They find out that it is a staff with magical powers which can bring back their dead father for one day, if used properly. However, things don't go as planned, and so to make Ian's wish to see his father come true, both the siblings set off to a quest to fulfil the incantation and reignite the magic that this world has long forgotten.

Pixar movies are always known for their terrific animations and emotional storylines that plays around with conventions. Even their bad eggs- looking at you, Cars franchise - aren't total duds. Onward, directed by Dan Scanlon, may not be as fantabulous as some of their better efforts like Coco, Wall-E, and Toy Story franchise. But it scores at the most opportune times, especially the sentimental moments in the third act. And the animation is consistently gorgeous!

It, however, takes some time for us to get into the groove of what Onward is about. While the premise seems whimsical - a magical world where magic has gone extinct - the setting feels hard to digest, even for an animation movie. It isn't easy to adjust to a world where magical creatures roam around and then expect us to imagine that there is no magic in the world. Wouldn't the plot have worked better if they were replaced by humans, who seemed to have forgotten that the likes of Merlin were real? Just saying... Onward Trailer: Chris Pratt and Tom Holland's Teenage Brothers Rediscover the Magic That's Missing in This World (Watch Video).

Another niggle with the film is the bumpy ride that Ian and Barley sets off to. It has its niceties - like their father's disembodied pair of legs accompanying them offers some funny and poignant moments. But it takes some time to invest in their trip, since Onward can't get rid of the familiarity that accompanies with such ventures. We have seen such road trips taken by teens in the past - Percy Jackson series comes to my mind first - where the leads set off to find something magical and meet more magical hurdles on the way. The humorous interludes - like the heroes' encounter with a gang of biker fairies - don't often work out. Like I said, Onward takes its time to get its groove.

Watch The Trailer of Onward:

But once it does, then you are enamoured by its charm.

Just see how the film deals with Barley. He comes off across as a very annoying character. At first, that is.

It is deliberate, since like Ian, even we need to discover ourselves how special Barley is as a brother. Which is what makes the third act such a winsome watch, and Pixar once again, spins its magic (I know, I am repeating this word often) when it comes to building relationships and camaraderie. While Onward's message for the viewers - the magic you seek maybe closer to you than you know - isn't something Pixar hasn't explored before, the final moments do drive it beautifully in our hearts, and that's mostly for how Ian and Barley's bromance has been developed.

It also helps that the MCU stars Chris Pratt and Tom Holland share some very superb chemistry, even it is simply their vocal performances that we are experiencing. Others who stand out are Julia Louis-Dreyfus as the courageous mother and Octavia Spencer, voicing a Manticore who forgot to be ferocious.

- Some Subplots Are Needless

Onward is a fun, magical journey with a likeable camaraderie between Holland and Pratt fuelling the quest. It may not be as magical as Pixar's 'masterpieces', but both kids and their parents could hop on to this ride and have a great time here!

(The above story first appeared on LatestLY on Mar 04, 2020 10:05 AM IST. For more news and updates on politics, world, sports, entertainment and lifestyle, log on to our website latestly.com).