The 93rd Academy Awards wound up recently and it has left everyone with mixed feelings. But what it did give many to talk and discuss is the historic wins. We have summed up a few of them which will go down in history. 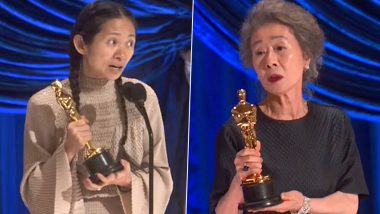 The Academy Awards have been accused of a lot of things in the past. Back in 2015, a hashtag became its undoing - Oscars All White. The Academy was shamed terribly on Twitter for that. Even though Parasite, a South Korean film, swept away major honours at the event, it was still criticised for not having any women directors in the nomination list of the said category. Remember Natalie Portman's Dior gown? Guess that prompted the Academy to make a difference because this year as nine out of 20 made up of actors of colour. If that wasn't enough, there were so many record wins this year that 2021 will be well-remembered in the chronicles of Oscar history. Let us tell you a few of them. Oscars 2021 Full Winners List: From Nomadland to Soul to Sound of Metal, Check Out the Big Victors of the 93rd Academy Awards

Chloé is the first MCU director to win the award, with her next project ‘ETERNALS’ releasing in November. pic.twitter.com/YkSxII5Uab

She may not be the first Asian woman to win the honour but she is definitely the first Korean actress to lift the trophy. Japanese-born Miyoshi Umeki had won in the same category back in 1957 for Sayonara. But what won everyone's heart here was her acceptance speech. She roasted everyone for mispronouncing her name, then forgave them, sweetly flirted with Brad Pitt and made history. Oscars 2021: Irrfan Khan And Bhanu Athaiya Remembered In The Memorium Section (Watch Video)

'Thank you to our ancestors who put the work in, were denied, but never gave up.' — Watch the moment that two Black women made history by winning the Academy Award for best hair and makeup in 'Ma Rainey's Black Bottom'#oscars pic.twitter.com/vvNZ9gZnsi

This is Hopkins'second win in the same category after The Silence Of The Lambs. At 83, he becomes the oldest winner in the Best Actor category at the Oscars.

Congratulations to Anthony Hopkins on his #Oscars win for Best Actor for #TheFather! pic.twitter.com/k09OBNNeHx

Well, if you ask us, the Best Actor win seemed like an afterthought which left everyone quite shocked. We have a feeling even Hopkins might have been equally bewildered.

(The above story first appeared on LatestLY on Apr 26, 2021 09:58 AM IST. For more news and updates on politics, world, sports, entertainment and lifestyle, log on to our website latestly.com).