Oscars 2022: Nicole Kidman’s Viral Pic Was NOT Her Reaction to Will Smith-Chris Rock’s Slap – Here’s the Truth

Nicole Kidman's viral moment from Oscars 2022 was actually clicked much before the whole Will Smith and Chris Rock's slap controversy. Read the full story to find out the truth. 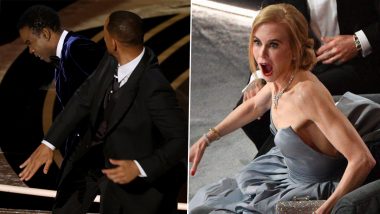 For the world, Oscars 2022 turned out to be a rather shocking experience following Will Smith and Chris Rock's slap controversy that occurred on stage. While on one side there were netizens churning memes related to the unscripted incident, on the other hand, many celebrities also reacted to the mayhem. However, it was Nicole Kidman's jaw-dropping picture claiming it was her reaction to the Will-Chris fiasco that grabbed attention. But... wait, there's more to the tale. Nicole Kidman Reacting to Will Smith Slapping Chris Rock at Oscars 2022 Is the Meme of the Day!

As of now, reported by Vulture, the picture of Nicole sitting in the audience, displaying a shocking face over Will Smith slapping Chris Rock is not her reaction to the slap drama. Yes, you read that right! Reportedly, the Nicole Kidman's viral picture was clicked before the Chris Rock altercation. Will Smith Slaps Chris Rock at Oscars 2022; Viral Incident Ignites Funny Memes and Jokes on Twitter.

"The Slap" was so powerful it made Nicole Kidman's face move for the first time in 11 years #Oscars2022 #Oscars #WillAndChris #WillSmith #ChrisRock pic.twitter.com/tR16bzkITt

Revealing the truth behind Nicole's photo, photographer Myung Chun (of the Los Angeles Times) told Vulture that Kidman appeared to be "excited to see Jessica Chastain across the room" when the photo was clicked. Speaking about the same, he said, "Kidman then reached out her arms and waved to her with both hands. ... Shortly thereafter, Chastain walked over to greet Kidman and her husband Keith Urban."

In a nutshell, Nicole Kidman's viral click was from Oscars 2022 but it was not a reaction to Will Smith punching Chris Rock over Jada Pinkett Smith's joke. Stay tuned!

(The above story first appeared on LatestLY on Mar 29, 2022 02:11 PM IST. For more news and updates on politics, world, sports, entertainment and lifestyle, log on to our website latestly.com).