Park Hae Jin's new show Old School Intern is getting popular in India for a completely different reason. The chicken noodle commercial in Hindi in the show has gone viral. 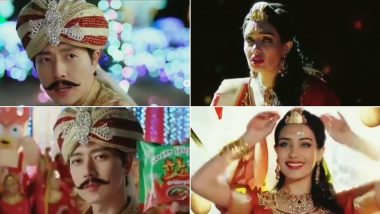 South Korean content is popular all over the world. The Korean wave is a legit thing that is increasingly making more and more fans globally. Indians too are impacted by it. So finding them represented in a K-drama is bound to stump, surprise, shock, offend and curse many. Since yesterday a video of Park Hae Jin is going viral on social media sites. In full Indian ethnic get up, the actor is seen endorsing a chicken noodle brand that doesn't have chicken in it. The footage is from Park Hae Jin's ongoing show Old School Intern. My Secret Terrius, South Korean Drama Series Predicted COVID-19 Pandemic Back in 2018? Here’s The Fact Check Behind The Viral Video That Is Not From China

There's a girl lamenting how she wants to have chicken noddles but she can't as she is vegan. That's when Park Hae Jin jumps out of something and makes his case. The video reeks of stereotypes from Bollywoodish dance steps to outlandish costumes and sets. For extra authenticity, there are elephants too in case you can't make the connection. Obviously, there are tons of reasons to be offended here but we are focussing only on the Hindi being spoken here.

A post shared by Korean Culture India FanClub🇮🇳 (@koreancultureindiafanclub) on May 20, 2020 at 9:44pm PDT

Old School Intern has Park Hae Jin playing a strict boss and disciplinarian. It's not the first time that something from India has been used here. Gandhi is part of many dialogues and so is Daler Mahendi's Tunak Tunak Tun.

(The above story first appeared on LatestLY on May 22, 2020 01:17 PM IST. For more news and updates on politics, world, sports, entertainment and lifestyle, log on to our website latestly.com).