Primetime Emmys 2021: Streaming Date and Time, Nominees, Where to Watch Online - All You Need to Know About Upcoming Award Night

Jennifer Aniston recently headlined the news when she mentioned that she will not be attending the Emmys 2021 due to Covid-19 concerns. She appeared on Jimmy Kimmel Live and admitted that although she's nominated for an Emmy Award this year, she won't be attending the ceremony for safety reasons. 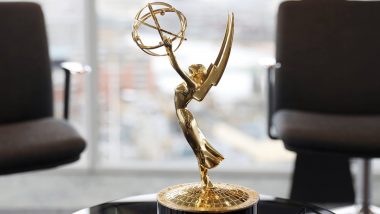 The 73rd Primetime Emmy Awards is just a day away from taking place. The event marks the return of another award show in person during the pandemic. The award night will take place on Sunday (September 19), and many of the audience's favourites have been nominated for an Emmy under different categories. The Crown, Ted Lasso, WandaVision, The Boys can win major awards, and fans are excited to see if their favourites would be able to make it to the top. Emmys 2021: Mj Rodriguez Creates Emmy Awards Milestone; Becomes First Trans Person To Be Nominated for Lead Actress (Drama) Category.

Where Is Emmys 2021 Taking Place

The open-air event will take place in a high-end tent on the LA Live deck, next to the Microsoft Theater in downtown Los Angeles. Proof of vaccination and a negative COVID test result is also required for each person attending the ceremony.

When and Where Can You Stream It

The 73rd Emmy Awards will air on CBS on September 19 at 5 PM PT. The event will also stream on Paramount+, the ViacomCBS-owned streaming service. Other streaming options available are Hulu Live TV, YouTube TV, FuboTV, and Sling offer CBS streams in select TV markets. All of those platforms offer free trials.

Cedric the Entertainer is set to host the festivities.“Since I was a little boy huddled up next to my grandmother, television has always been my reliable friend, so it is an enormous honour for me to host this year’s Emmy Awards,” he said in a statement.

Emmy nominees were announced in July. The Academy of Television Arts & Sciences announced the shows who entertained fans and critics. Going by the list, it is Netflix's The Crown and Disney Plus' The Mandalorian and WandaVision are leading the race.  Jennifer Aniston Will Not Be Attending Emmys 2021, Here’s Why.

Jennifer Aniston recently headlined the news when she mentioned that she will not be attending the Emmys 2021 due to Covid-19 concerns. She appeared on Jimmy Kimmel Live and admitted that although she's nominated for an Emmy Award this year, she won't be attending the ceremony for safety reasons. "No, I will not be going," she told Jimmy Kimmel recently, adding that producer and director Ben Winston will attend and accept on her behalf if the Friends reunion wins.

(The above story first appeared on LatestLY on Sep 18, 2021 10:24 AM IST. For more news and updates on politics, world, sports, entertainment and lifestyle, log on to our website latestly.com).