Megan Fox whose earlier mission was to hunt down the kidnappers in a remote part of Africa soon turns ugly after she and her team start getting hunted by a pack of lions. 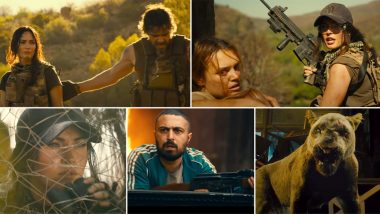 Megan Fox's next big release is Rogue where the actress fights a war with a deadly lion. After coming across films like The Shallows and Crawl, where a female lead was pitted against the wrath of deadly predators, Rogue's seems like a new addition to the list but it certainly has the potential to be better than the rest. Fox's no just a good looking face this time around but a smart mercenary whose rescue mission soon turns deadly and chaotic. Megan Fox Birthday Special: Her Scintillating and Daring Choices Have Always Taken the Fashion World by Storm (View Pics).

We are being honest when we say that Fox's role as a no-nonsense mercenary did remind us of Chris Hemsworth from Netflix's Extraction. Of course, in here she's fighting a war against 'rogue' lions and it isn't an easy task. She plays the role of a team leader O’Hara who leads a group of mercenaries on their rescue mission in a remote area of South Africa. However, their exit plan gets compromised and they end up getting stranded in a place that has killer lions on the loose. Next thing we know, she's embroiled in a war which sees her fighting a group of rebels and violent lions who seem hungry since forever.

The plot though basic looks intriguing, thanks to lions and Fox who looks determined to win her war. Produced by 'Lionsgate' (no pun intended), the movie will be available on digital and video-on-demand on August 28. The film directed by M.J. Bassette also stars co-stars Jessica Sutton, Calli Taylor, Brandon Auret, Adam Deacon and Sisanda Henna.

(The above story first appeared on LatestLY on Jul 22, 2020 08:31 AM IST. For more news and updates on politics, world, sports, entertainment and lifestyle, log on to our website latestly.com).