Rooney Mara Birthday Special: From The Social Network to The Girl With The Dragon Tattoo, 5 Best Performances That We Loved!

While not really a household name, Rooney Mara has proved time and time again that she is an actor of high calibre and deserves to be recognized for her performances. She has been flying under the radar for a decade now which is a shame considering she has given great performances in movies. 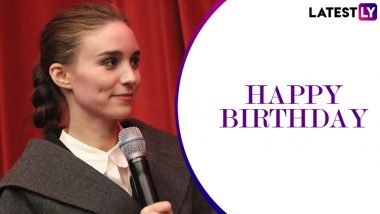 Rooney Mara has proved time and time again that she is an actor of high calibre and deserves to be recognized for her performances. She has been flying under the radar for a decade now which is a shame considering she has given great performances in movies. Starting off her career in 2005, Mara has come a long way in the industry and is truly appreciated by film buffs. Joaquin Phoenix and Rooney Mara Welcome Baby Boy, Name Him After the Actor’s Late Brother River Phoenix.

In order to celebrate her 36th birthday, we are taking a look at 5 of her best performances:

This drama based on the making of Facebook was released to much acclaim by critics. In the movie Mara plays Erica Albright, a girl Mark Zuckerberg goes out on a date with. She just has a few scenes but still the acting prowess displayed by her is amazing and helped her gain some much deserved exposure.

While the movie itself is not so great, Rooney Mara still stands out as one of the best parts of it. She outshines the cast in every way, and plays the part of Nancy Holbrook really well. Considering she had to match the performance of Heather Langenkamp from the original film, she does pretty well and puts her own spin on the performance.

Mara’s performance in A Ghost Story is what makes the film so effective. Playing the role of M, who loses her husband and then he goes on to become a ghost, the movie deals with questions about life after death and the different stages of grief. All of this is brought to the screen wonderfully by Mara’s incredible acting talents.

This Steven Soderbergh directed film sees Mara play the role of Emily Taylor who is prescribed experimental drugs by psychiatrists after her husband is released from prison. Mara plays this role incredibly well and makes the viewers question everything they are seeing in the movie.

Lisbeth Salander (The Girl with The Dragon Tattoo)

The movie sees Mara reunite again with The Social Network director David Fincher. This probably her best role and the movie that got her into the Hollywood spotlight. Playing the role of a computer hacker, Lisbeth Salander is a person with a traumatic past. Mara’s acting is what makes the character so good, since her scenes are some of the best in the movie. It also got Rooney Mara a nomination at the academy awards.

(The above story first appeared on LatestLY on Apr 17, 2021 09:11 AM IST. For more news and updates on politics, world, sports, entertainment and lifestyle, log on to our website latestly.com).