Sam Raimi Birthday Special: From Evil Dead 2 to A Simple Plan, 5 Must-Watch Cult Movies Made By the Spider-Man Director

Sam Raimi turns 61 today and on his birthday lets reminisce his cult movies that are loved by the audiences even today. We obviously can't stop thanking Sam for giving us the iconic Evil Dead series starring Bruce Campbell or say Tobey Maguire's Spiderman trilogy. Sam Raimi's passion for cinema is the one thing you cannot take away from him. 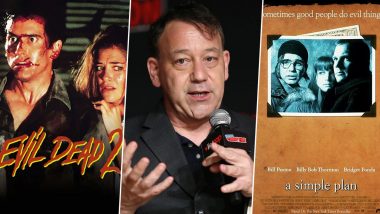 American filmmaker Sam Raimi turns 61 today and on his birthday let's reminisce his cult movies that are loved by the audiences even today. We obviously can't stop thanking Sam for giving us the iconic Evil Dead series starring Bruce Campbell or say Tobey Maguire's Spiderman trilogy. Sam Raimi's passion for cinema is the one thing you cannot take away from him. Raimi was born in Royal Oak, Michigan, to a Conservative Jewish family. His ancestors were Jewish immigrants from Russia and Hungary. He made his directorial debut with 1977 movie It's Murder in which he even acted alongside Scott Spiegel. Here’s How Sam Raimi’s Spider-Man 2 Missed Out On Having an Iron Man Crossover But Did Have a Doctor Strange Connection

In Raimi's five-decade-long career, he has directed just 18 films in total and fans have all the eyes on his next - Doctor Strange in the Multiverse of Madness, which will reportedly bring Tobey Maguire back in the spidey suit as he would star alongside Andrew Garfield and Benedict Cumberbatch as Dr Stephen Strange. Raimi has not only directed films but also produced several successful TV series, including Hercules: The Legendary Journeys and its spin-off Xena: Warrior Princess. He founded the production company Renaissance Pictures in 1979 and the rest is history. On filmmaker's 61st Birthday, let's take a look at five of his must-watch films. Sam Raimi Confirms a New Evil Dead Movie Is Under Works and He Would Like to Direct Another with Bruce Campbell on Board

Sam Raimi's 1987 horror classic Evil Dead 2 starring Bruce Campbell in the lead is one of the most entertaining films till date. The film gives us ample of scary moments but what it does simultaneously makes the mockery of the devil at the same time. A film absolutely enjoyable to watch with friends if you have some get together plans at Halloween.

Yet another genre-defining film by Raimi, yes we are talking about his 1998 neo-noir thriller A Simple Plan that stars Bill Paxton, Billy Bob Thornton, Bridget Fonda in the lead. This gripping film takes you to the depths of human greed, desperation and the mesmerizing performances from the cast is yet another reason to watch it.

The Quick And The Dead

Raimi's 1995 western classic stars Russell Crowe and Leonardo DiCaprio before their days of fame. Gene Hackman makes for an impressive villain role as well. Watch this Sam Raimi's cinematic beauty with your cowboy hat on.

Cate Blanchett, Katie Holmes, Keanu Reeves starrer mystery-thriller The Gift is Sam Raimi's super intriguing 2000 film that you shouldn't miss. Murder mystery fans are in for a treat as they also get to witness stellar performances by the lead cast.

Drag Me To Hell

Sam Raimi and adding some fun to the horror genre is still a better love story than Twilight. Jokes apart but If you don't get black comedy, or didn't find the Evil Dead trilogy funny at all then this film is not for you. Understanding dark humour in classic Raimi style is what the filmmaker's fans are up to. The film stars Alison Lohman, Justin Long, Ruth Livier in the lead.

Wishing you a day full of laughter and happiness Sam Raimi and a year that brings you much success, Waiting For Doctor Strange 2 eagerly. Happy Birthday Once Again!

(The above story first appeared on LatestLY on Oct 23, 2020 10:41 AM IST. For more news and updates on politics, world, sports, entertainment and lifestyle, log on to our website latestly.com).